Ford launches the 2021 F-150, talks about the electric F-150, and calibrates the F-Series impact on the U.S economy
#Ford

“F-Series pickups are the backbone of work and productivity across the country,” said Jim Farley, Ford chief operating officer and incoming CEO, at the launch of the 2021 F-150 at the Rouge Complex in Dearborn, Michigan, a legendary site in automotive history, a facility that Kumar Galhotra, Ford president, Americas & International Market Group, described as “The birthplace of modern American manufacturing.” 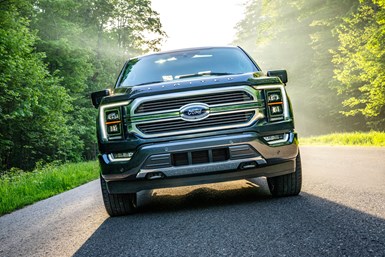 And the Rouge, which was first opened in 1928, when it was biggest integrated factory in the world, has undergone a series of transformation over the years, with the latest being announced by Bill Ford, executive chairman: the Rouge Electric Vehicle Center. As he put it, “We are proud to once again build and innovate for the future here at the Rouge with the debut of our all-new F-150 and the construction of a new modern manufacturing center to build the first-ever all-electric F-150.”

The company is investing $700-million at the Rouge for the F-150, the internal combustion engine-only versions, the PowerBoost hybrid version and the forthcoming—as in by mid-2022—all-electric version of the pickup.”

About the electric F-150, Farley said, “It will be a seriously capable, purpose-built tool for serious truck customers.”

In other words, while there are some announced electric trucks that seem to be targeting more of the recreational slice of the market, Ford is going at the commercial and personal truck buyers.

While details are limited about the truck, Ford has revealed:

Backbone of the U.S. Economy

To the point of Farley’s “backbone of work and productivity across the country,” Ford engaged the Boston Consulting Group to look at the effects that Ford as a whole and the F-150 have on the U.S. economy.

For example, overall Ford is the leading U.S. auto manufacturer, producing one in five vehicles that are built in the U.S. And in the pickup space, in 2019 it produced two times as many full-size pickups as any competitor.

Can a truck be instrumental to the U.S. GDP. According to the Boston Consulting Group, the F-Series is.

Ford supports about 1 million jobs in the U.S., calculated on direct employment, the multiplier effect in the supply base, dealer employees, and the suppliers to the dealers (i.e., about 11 to 12 jobs for every direct Ford employee).

What’s interesting is that the F-Series supports 500,000 of those jobs (in its case, about 13 to 14 jobs per every direct Ford employee).

Of the 16.6-million F-Series trucks on the road, approximately 26 to 35% of them are used for commercial work. The average truck occupancy is 2.1 to 2.4 people. So there are about 13 million Americans using an F-Series truck on a daily basis for work—which in itself is about 8% of the total U.S. workforce.

Impact on the U.S. GDP

In terms of contribution to the U.S. GDP, Ford through manufacturing and sales contributes $58 billion, and then with the multiplier effect (e.g., after-sales and employee re-spending) that’s an additional $42 billion, or a total of about $100 billion.

In terms of consumer products, only the iPhone out generates it in terms of revenue: Apple U.S. iPhone revenue is $55 billion.

With all of the importance of the F-150 to it, it might seem as though Ford is pretty much focused on, well, the F-Series.

But it turns out that when it comes to the future of mobility, 20% of Ford’s patent families since 2013 are focused on it.

What’s more BCG has determined that ford has filed 84% more future of mobility patents than FCA and GM combined.

Still, given that the F-Series is the most popular vehicle on the road in 39 states—and the Toyota Camry and the Honda Accord are second to it in popularity, each with three states—it is hard to underestimate the American importance of the truck.

A final word from Bill Ford:

“We cannot have a strong economy or a strong democracy without a strong manufacturing base. I have sat with presidents of both parties who understand this. This is not and should not be a political issue. But it does have to be a national mission. There does have to be a sense of urgency to it. Ford is going to play our part. We are going to embrace our responsibility to help get the country’s economic engines running properly again. And once again, it starts right here at the Rouge.”