Whether it is a conventional ICE powertrain or a full battery electric setup, odds are that there is plenty of aluminum content, which means that there is machining involved. The material, notes Brent Marsh, business development manager for the Automotive Segment at Sandvik Coromant, is light, durable, corrosion-resistant, and strong, which are good for the end product, and is ductile, so it is comparatively easy to machine.

Burrs are always an issue. But in applications like valve bodies, they can be a real problem. 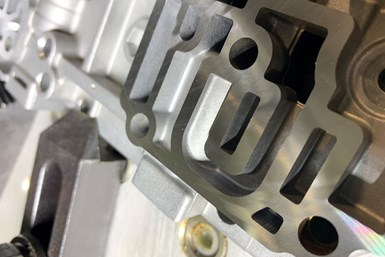 According to Sandvik’s Rick Crabtree, automotive specialist for the Americas, while machining an aluminum valve body can be done in a matter of seconds, deburring can require minutes.

To address this problem, Sandvik has developed a new design for face mills.

Crabtree points out that ordinarily, all of the inserts on a mill are on the same plane. Burrs can be created when the tool goes into and out of parts. This is particularly the case when the cutter starts getting a little dull.

The M5 Series of milling cutters—which accommodate operations from roughing to finishing and even superfinishing—has been developed especially for aluminum alloys.

The M5B90 is engineered for face milling aluminum without burrs.

One of the features of the operation of the face mill is that it is, Crabtree explains, more like a rotary broach in operation in that not all inserts are on the same plane such that when the tool is moved out of the part there is a wiper action that inhibits the generation of burrs, as there is the removal of, say, 40 microns from the surface.

Consequently, machining is done quickly and post-processing is minimized, at most.