One more thing about things that go really fast.

Turns out that the Volvo Trucks’ Iron Knight is the world’s fastest truck—and note that this is a big truck, 4.5 metric tons, not a light-duty pickup.

The specially built truck was driven by Boije Ovebrink at the “Skellefteå Drive Center,” a former airfield outside Skellefteå in northern Sweden. (Remember: Volvo Trucks is still a Swedish company; the Volvo that makes cars is part of the Zhejiang Geely Holding Group.) 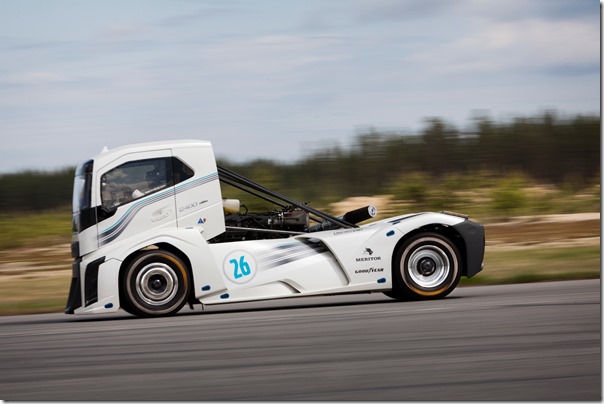 While the truck was specifically engineered for the tasks, its transmission is stock and the D13 engine started out that way, but was modified so that it produces 2,400 hp and 6,000 Nm of torque.

Of the gearbox, Claes Nilsson, president and CEO of Volvo Trucks, said that the land-speed record-setting performance in both 500- and 1,000-meter runs “shows that our I-Shift Dual Clutch transmission has enormous potential and that it does not let you down under extreme conditions. The fact that the world record-breaker uses the very same gearbox that is found in our series-built FH trucks is something that we’re really proud of.”

Goodyear developed special tires for the truck, though they based them on their latest generation of truck tire carcasses. “With so much power and torque, ensuring that 4.5 tonnes of truck sticks to the track at speeds of up to nearly 280 km/h is a real challenge for the tires, “said Laurent Colantonio, Director Tire Technology Commercial of Goodyear Europe, Middle East and Africa.

No, we don’t quite understand it, either.