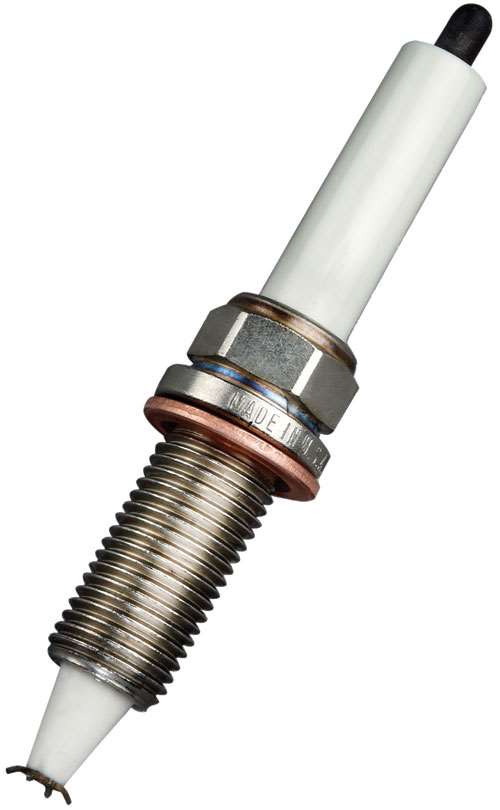 This looks like a spark plug. It looks that way by design. It is the igniter portion of the Federal-Mogul Advanced Corona Ignition System, which is being developed to improve fuel efficiency and reduce emissions in engines running advanced strategies. 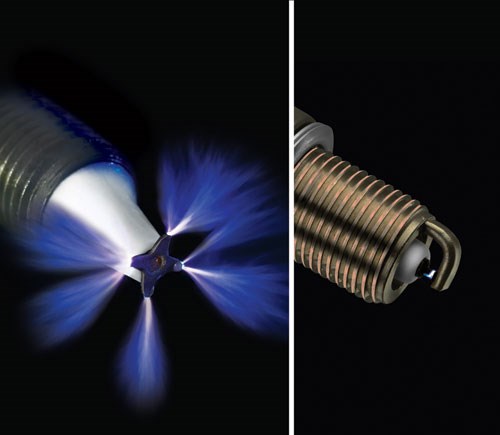 The corona system on the left. Conventional spark plug on the right. If both are used in a cylinder to ignite the air-fuel mixture, which is more likely to reliably get it done?

“Like the automobile itself, the internal-combustion engine had no single inventor. Two-cycle versions were patented by Stuart Perry, a New York inventor, in the United States in 1844 and 1846, and by Etienne Lenoir, a Belgian mechanic, in France in 1860. . . . Credit for being ‘first’ is generally given to Lenoir, because his engine was commercially successful. A major innovation of the Lenoir engine was the use of an electric spark plug powered by a battery and coil to ignite the fuel mixture of air and illuminating gas.”—The Automobile Age, James J. Flink, The MIT Press

But as Kristapher Mixell, advanced corona ignition system development, Powertrain Energy, Federal-Mogul (federalmogul.com), there are significant changes underway in the combustion strategies that OEMs are applying as they work to meet CAFE standards that call for 37.8 mpg for cars and 28.8 mpg for light trucks by 2016—and that’s up from 33.3/25.4 mpg, respectively, for 2012.

And the traditional coil-and-plug system may not be the correct means by which combustion can be ignited in these new approaches, such as stratified charge, lean burn, and using high levels of EGR. “We can allow these strategies to work more effectively and in regions and loads they were never able to run before, and to be a salable strategy,” Mixell says for what’s behind the development of the advanced corona ignition system (ACIS) that he and his colleagues are developing. Note the use of the word “salable”: this is something that is being developed for commercial deployment, not the stuff of white papers and fundamental research.

As for the rationalization for why the ACIS is called for, he explains, “As you add more exhaust gas and lean mixture out, the mixture is more difficult to ignite, and it burns really slow. Because this is a spark ignited system, you discover that the way we’ve been igniting the fuel-air mixture for so many years works fantastic—I don’t want to take anything away from spark plugs—with today’s strategies.” Note the “with today’s strategies.” Mixell continues, “With a lambda 1 type mixture and certain areas of lean and EGR, it works quite well. But if you want to push these strategies further, you need something different.”

Enter the idea for the ACIS.

Actually, “the idea for the ACIS” sounds a bit too theoretical. Although Mixell says that it isn’t something that anyone can put into their production volume engines tomorrow, they’ve been working on this since 2007, and when we talk, in October, 2011, they are, he says, “on the cusp” of moving from working with the R&D folks at OEMs to working with the advanced people—the pre-production group.

And while “the idea for the ACIS” sounds along the lines of “oh, that would be a nice thing to have,” know that they’ve calculated that through the use of the high-energy, high-frequency electrical field that ionizes the air and fuel in the cylinder, they’re able to generate rapid ignition and quick burning, which results not only in performance improvements (through more timely and thorough combustion, more work is performed) but—and here’s where it goes from being nice to being a real game changer—as much as a 10% fuel efficiency improvement compared with standard spark ignition.

(Yes, one of the brands under Federal-Mogul is Champion, as in “Champion Spark Plugs.”)

Mixell makes a quick run through engine design in recent years. During the ‘60s and ‘70s, the location of the spark plug in the cylinder was generally off to the side. “Not ideal for combustion.” But then when four-valve cylinders came in, the spark plug was centered. Mixell says that the improvement in performance of those engines was as much as result of the proper placement of the spark plug as from the valve-train arrangement. With time there have been improvements ranging from improved fuel injectors to more powerful engine control units. “Now we’re at a point where fuel-conversion efficiency is quite good. Spark plugs do a good job; burn rates are quite acceptable for combustion as we’ve been thinking about it.”

But with the more advanced combustion strategies that are being developed, spark plugs don’t do quite as well under these conditions.

If you have the perfect amount of fuel and air and the right timing, there is a high probability that you’ll have combustion. If you start removing fuel, the probability goes down. Add EGR and it goes down further. “You don’t want one roll of the die,” Mixell says. “You want as many rolls as you can get at one seating at the table. That’s what corona allows you to do.”

Rather than a spark being created in a gap, there are multiple streamers of ions from the nickel-steel tip of the ACIS. (In effect, it looks somewhat like a Tesla coil—and interestingly enough, Nikola Tesla held a patent for a spark plug.) This increases your odds of more thorough ignition, even when the probability is reduced. (Mixell says that it works well when the engine is at lambda 1, but the real objective is to provide benefit under the conditions that can provide better fuel economy). Whereas spark plugs initiate combustion through heat, the ACIS does it via a chemical reaction (the fuel and air are ionized, react with one another, and then as a result release heat).

“We’ve taken the approach that we want this to be easily integrateable into an existing engine,” Mixell says. In other words, they’ve developed the ACIS so that there are two parts, the igniter which resembles a spark plug and an inductor that is basically like an ignition coil. They’re using materials that have been long proven in automotive service. So it is designed and engineered to be swapped out with traditional coil-and-plug systems without major re-architecting.

In other words, this is far from something that has been bread-boarded. When we visit they’re running the ACIS in one of the cylinders of a production 1.6-liter, turbocharged direct-injection engine to see how it performs compared to conventional spark plugs. And so far, very good.