Yesterday at the Chicago Auto Show Fiat announced that for 2018, all 500 models in the U.S. will be turbocharged.
#Fiat #oem #MINI

If someone says something to you about the Buick Regal and you don’t own one, chances are you either have no opinion or simply shrug and say something about how it is probably a nice car.*

And given those two cars, you might, again, not think much one way or the other about the Regal but wonder how or why FCA keeps the lights on in the Fiat studios (not mere dealerships, those outlets) because you probably figure—based on your own observations of traffic, driveways and parking lots—that the model is a resounding non-success. 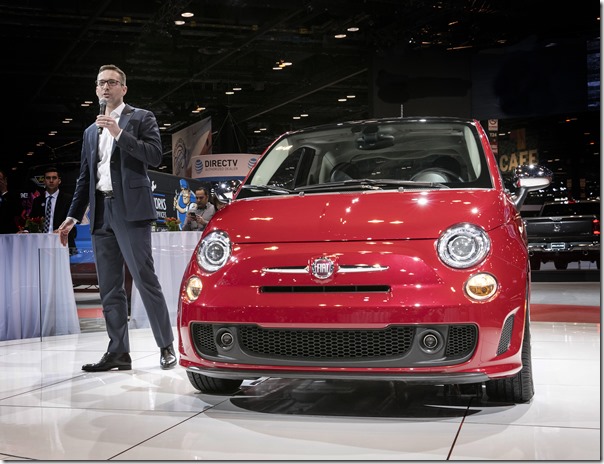 You would not be entirely wrong in the context of the sales volumes of most vehicles. In 2017, according to Autodata, FCA sold 12,685 Fiat 500s, which was down 17.8 percent from the previous year.

For one thing, it is in the EPA “mini-compact” category. Yes, that means small with a capital S.

To put that in context, the VW Beetle, another small car that also seats four, has 85.1-cubic feet of passenger space and 15.4-cubic feet of cargo capacity.

So the 500 is a car that you buy because of what it is, probably not something that you cross shop with something else.

You either want one of these or you don’t. With the Regal, there is an array of cars to consider in its stead.

Yesterday at the Chicago Auto Show Fiat announced that for 2018 all 500 models in the U.S. will be turbocharged. The cars will all be equipped with a 1.4-liter MultiAir Turbo. The Pop and Lounge models will produce 135 hp and 150 lb-ft of torque. In the 2017 models of those same trims there is a 1.4-liter MultiAir. No turbo. That engine produces 101 hp and 97 lb-ft of torque.

Clearly, this change is a huge difference.

The Pop and Lounge models get some exterior modifications along with the more powerful engine. Like 16-inch wheels, body-color fascias, ground-effects side sills, and a rear spoiler. There is an improved braking system and sport suspension.

One thing that’s perhaps not taken into account as regards the 500 is that it is a vehicle that isn’t simply sold in the U.S.

A case could be made that the 12,685 units sold in the U.S. are simply plus business.

Credit must be given to Steve Beahm, Head of Passenger Car Brands – Dodge, SRT, Chrysler and Fiat, FCA – North America, and his team for moving forward with the 500.

And another bit of context: last year Hyundai sold 12,658 Velosters. And for 2019 Hyundai is introducing an all-new one. Including a turbocharged version.

*While it has been a few years, the last time I drove a Regal I was greatly impressed, as you can see here.