Porsche and partners have developed a system to simulate production operations that can provide cost-effective, low-cost output
#Porsche #facilities

Even though its volume may be low, it is still looking at the ways and means to achieve low-volume series production of products that are comparatively cost-effective.

So to that end it—along with IT consulting subsidiary MHP and insurance group Munich Re—announced in January that “FlexFactory” was being established. Not for Porsche, per se. But for manufacturing customers who are looking for operational improvements in the field of low-volume production. 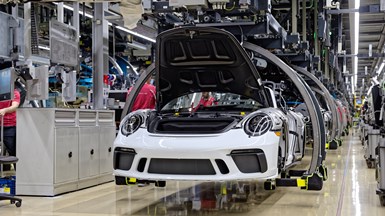 The objective is not to make things. Rather, its purpose is to make a determination of how companies can “implement innovations or article variants faster and more efficiently than in the traditional production process”—and here is the important bit—“with less capital input.”

If tooling costs are no object, then companies can be as flexible as they want to be.

Obviously, that’s not viable for any organization, not even Porsche.

So the FlexFactory concept takes the production know-how from Porsche, the digital process optimization capabilities of MHP and the finance (and insurance) modeling of Munich Re. Customers can obtain the recommended approach to achieving the ability to operate in a low-volume manner.

Since the announcement, there has been a test of the concept, using the Porsche body shop as an example. There were simulation and optimization of variants of a car door run on a production line.

There was a simulated multi-product line developed that was compared against the actual door line in the Porsche shop. The required quantities were input and a determination was made as to determine how the theoretical costs of the simulated system would compare with the actual costs that are being borne by Porsche.

The result was that the line as conceived by FlexFactory could provide the type of productive flexibility that the product engineering team was looking for.

Lutz Meschke, Deputy Chairman of the Executive Board and Member of the Executive Board responsible for Finance and IT at Porsche AG, noted, “This joint venture is still small, but it is perfectly formed. It can solve the challenge of producing even small series economically and thus open up a new chapter in industrial production.”

Perhaps we’re seeing the development of mass-manufacturing techniques being brought to small-lot production.