But according to Corey Holter, Ford car group marketing manager, the C/D segment in which the Fusion competes is nontrivial. According to figures from Autodata, the “Upper Middle” category--which ranges from the Accord to the Volkswagen Passat with the Fusion in between—accounted for deliveries of 1,611,345 units in 2017. Yes, that number is down by 11.1 percent from ’16, but that’s still a lot of cars. Not something any reasonable automaker would walk away from.

So to make the Fusion more competitive in the market, the company has made modifications to the 2019 models, something that it had also done for model year 2017.

While there are changes to the front and rear fascias and grille (chrome on the S, SE and SEL models; chrome mesh on Titanium), as well as a new deck lid panel, fog lamps and LED tail lamps, one of the big changes is a technology suite that the company made public just one week ago, the Ford Co-Pilot360. This driver assistance package combines automatic emergency braking with pedestrian protection, blind spot information with cross-traffic alert, lane keeping, auto headlamp high beams, and a reverse camera.

Holter points out that the Fusion will not only be the first Ford product to get the package, but that it is going to be standard on all trim levels. 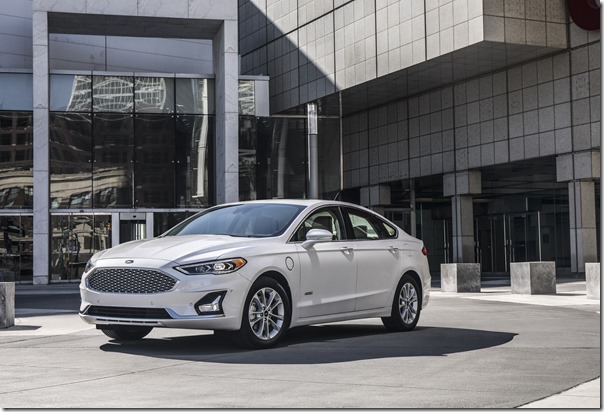 Holter also says that one of the more important technologies that is a part of the Co-Pilot360 package that’s lacking in competitive systems as standard is the blind spot information system (BLIS).

He notes that in research it has been found that 96 percent of drivers who have BLIS on their current vehicles want it on their next vehicle and that 86 percent of those who don’t have it now want it in the future.

In a presentation to members of the investment community in New York last October, Ford CEO Jim Hackett laid out a plan that would help the company achieve improved organizational and executional “fitness.” Part of the plan calls for the reduction in complexity in terms of orderable combinations.

The 2019 Fusion is going to benefit from that, going down to just 36 orderable configurations, exclusive of color. Holter explains that the company looked at order data and simply packaged popular options into standard offerings. For example, the SYNC 3 with an 8-inch LCD touchscreen was a popular choice among those buying the Fusion SE (which accounts for more than 50 percent of overall sales), so that is now part of the trim package.

Last week Ford also announced that it was going “all-in” on the electrification of its vehicles, investing some $11-billion on the powertrain technologies (hybrids as well as full electrification) over the next five years.

For model year 2016 Ford introduced the Fusion Energi, a plug-in hybrid version of the Fusion Hybrid. For model year 2019 they’ve improved that vehicle, as well, not only with the aforementioned trim mods, but by providing a new 9-kWh, air-cooled lithium-ion battery that’s the same size as the previous battery but which increases the electric-only range by about 20 percent, from 21 miles to 25 miles.

Clearly, the Fusion may be down (for the first two months of this year, 27,073 Fusions have been sold, which is off 15.5 percent compared with the same period last year), but it is certainly not out.