The quote projected on the front of that dilapidated building in the Corktown District of Detroit is the motto of the City of Detroit: “We hope for better things; it will arise from the ashes.” It was written by Father Gabriel Richard, who immigrated from France to the U.S. in 1792, and who came to Detroit in 1798.
#Ford #oem 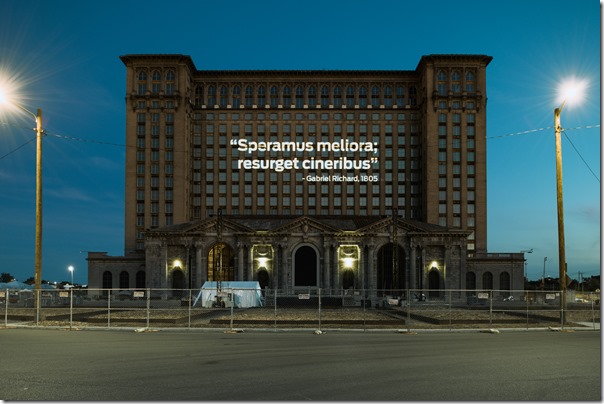 The quote projected on the front of that dilapidated building in the Corktown District of Detroit—a district so named because of the immigrants who settled there from County Cork, Ireland, driven from their homeland by the Great Potato Famine of the 1840s—is the motto of the City of Detroit: “We hope for better things; it will arise from the ashes.”

It was written by Father Gabriel Richard, who immigrated from France to the U.S. in 1792, and who came to Detroit in 1798. He wrote those words after a fire had essentially leveled the city. He had faith.

That building is the Michigan Central Station, which was opened in 1913. It was added to the National Register of Historic Places in 1975. The last train left the station on January 5, 1988.

It has subsequently become a site for those who are interested in the architecture of ruin and decay, a massive 18-story structure on the landscape of Detroit that serves as the buckle of what is often referred to as the “Rust Belt.”

And now it will serve as more than a symbol of the renewal of Detroit: with the Ford Motor Company’s commitment to transforming that building, as well as others in the Corktown neighborhood, into a place where people—the company plans to have some 2,200 of its employees working there by 2022—will advance the technology of the auto industry, this is an undertaking that will reimagine and recreate something that has been on the landscape for more than 100 years.

Not just the landscape of Detroit, but of the entire world. 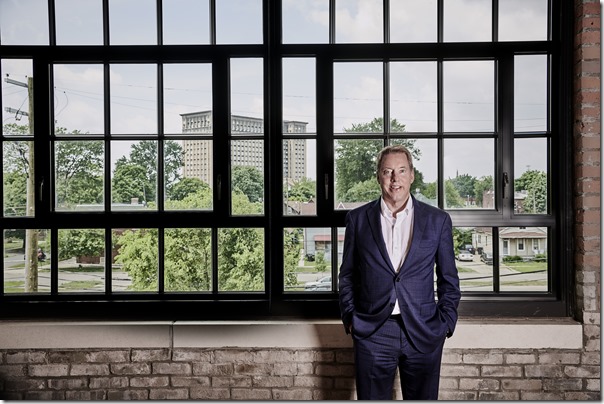 About four miles northeast of the Michigan Central Station the Ford Piquette Avenue plant stands. It was opened in 1904. It is the facility where the Ford Model B, C, F, K, N, R, and S were built.

It is the factory where the Model T, the car that transformed the world, was conceived and produced in 1908.

Henry Ford didn’t invent the car. He made it available to people of all walks of life, to people literally around the world.

The Ford Motor Company won’t have invented the autonomous vehicle. But it seems as though the company is working to make it something for the many rather than the few. Let’s face it: piloting Domino’s pizza delivery isn’t exactly something that is focused on the Grosse Pointe set.

Speaking of what the company that bears his family name, the company that was founded by his grandfather, is doing in Corktown, Bill Ford, Jr., the company’s executive chairman, said, “We aren’t just making a bet on Detroit. We are making a big bet on the future for Ford and the future of transportation. It’s exciting to imagine what’s possible as we build tomorrow, together.”

It isn’t just a big, old building that is going to be thoroughly rehabilitated, wired, filled with furniture and amenities, and staffed by thousands of people, both of Ford and suppliers to the company.

No, this is something that no other place in the world has—not Silicon Valley, not Shanghai, not Stuttgart: it is a landscape that came up from the ashes, returned to the dust heap of history, and which is rising again, cognizant of the past, but full of the potential of the future.

A landscape where there is faith.