Kevin Layden, director of Electrified Powertrain Engineering at Ford, points out that when a police officer is giving vehicular chase to someone, there is a good likelihood that the police vehicle is going to be starting from no or low speed, so the launch is critical. So to that end they’ve developed a means by which that can be accomplished while, at the same time, providing police forces with a way to greatly save on fuel costs. 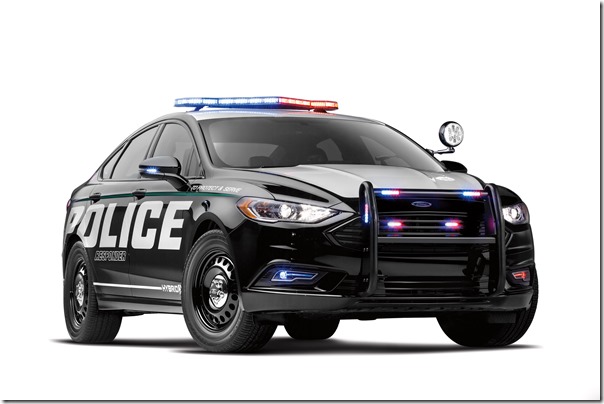 It’s the Police Responder Hybrid Sedan. The vehicle is based on the Fusion Hybrid. It is equipped with a 2.0-liter Atkinson-cycle I4 engine and an 88-kW permanent magnetic AC synchronous motor that provides 188 hp. There is a 1.4-kW lithium ion battery and regenerative braking so that when the driver gets on the binders there is as much as a 94 percent energy save realized.

While they’re still finalizing the numbers, according to Arie Groeneveld, chief program engineer for Ford Police Programs, the 0 to 60 mpg time achieved by the hybrid is analogous to that of the Crown Vic police cars that were once the sedan of choice. (According to Ford’s Joe Hinrichs, president, The Americas, 63 percent of police vehicles in the U.S. are built by Ford.)

The powertrain for the police version has a different calibration than the standard Fusion hybrid. The car will automatically go into “pursuit mode” when it recognizes that the car has gone from a low speed situation to wide open throttle. This not only adjusts the transmission shift points, but also makes sure that the full extent of the battery electric motors are brought into play to help achieve the full acceleration capabilities of the vehicle.

Leyden points out that once the vehicle is going, say, 100 mph, it is running on the gasoline engine alone. In terms of the pursuit aspects, it is about using the electric motor to help get it going.

But Groeneveld notes that there is a whole lot of time that police vehicles are at idle: as much as 61 percent of the time.

This is where the hybrid powertrain also provides notable benefits in terms of operating costs.

Say the vehicle is driven 20,000 miles per year, running two shifts per day, 365 days, and that it is the vehicle is idling 4.9 hours per 8-hour shift, and gas is at $2.50 per gallon. The hybrid is rated at an estimated 38 mpg combined. And during idling it can save 0.27 gallons of fuel per hour.

With that, they estimate an annual fuel savings of $3,877.

As Hinrichs notes, “It is saving about $4,000 per year in fuel costs and still capable of going after the bad guys.” 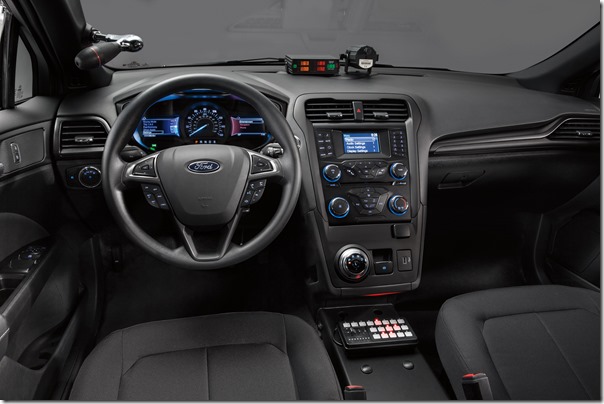 It is worth noting that the Police Responder Hybrid sedan is “pursuit-rated,” meaning that it is not just a Fusion Hybrid with a lightbar and a different paint scheme. Everything from the suspension to the seats have been developed with police driving (and idling) taken into account.