Ford Building in Detroit—Not Just a Structure but a Community

The Michigan Central Station in Detroit that Ford is transforming from an abandoned Beaux Arts shambles into the place from which its mobility future will be largely defined and created has been vacant since 1988, 500,000-square feet of something that has been used by film makers in need of striking ruins, used by graffiti artists and scribblers because it was there.

According to Shawn H. Wilson, manager, community engagement at Ford Fund, “Over the years Michigan Central Station became an artist’s playground. Artists went there to perfect their craft and build their brands.”

And while the building, which opened in 1914, is undergoing massive rehab to prepare it for moving in the people who are involved in Ford’s move towards autonomy and electrification, they are not going at this with a wrecking ball and lack of conscience. 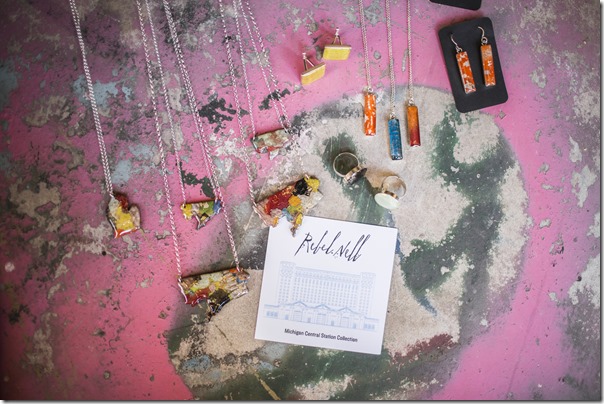 Pieces of the structure that have been covered by graffito are being transformed by a startup company in Corktown (as the area where the train station is located is known), Rebel Nell, into one-of-a-kind pieces of jewelry, pendants and earrings. Said Wilson, “Rebel Nell was able to help us identify artistic components inside the train station and which graffiti to use.”

Noted Rebel Nell co-founder and CEO Amy Peterson, “We have respect for the muralists and the artwork they left behind.”

Not only is this remarkable inasmuch as Ford is taking time and consideration in this rehab, the proceeds from the sale of the pieces created by Rebel Nell, called the “Michigan Central Collection,” are going to go to the benefit of COTS, a nonprofit organization that provides housing and other services for the homeless; Vista Maria, a community resource for disadvantaged children and their families; Love Runs, which raises funds to fight modern day slavery in Michigan; and Covenant House, which supplies shelter and support to homeless, runaway and at-risk youth.

Sometimes OEMs aren’t given credit for the good they do in the communities where they work.

Ford gets full marks for this effort, socially, economically and culturally.