Mike Kesti, global technical director, 3M Personal Safety Division, says that just 25 days ago, Ford Motor personnel came to 3M and provided both engineering and supply chain support to 3M for its production of personal protective equipment (PPE) in the battle against COVID-19.

He described it as “fresh energy.”

And the work has continued unabated.

During this period of time, in addition to helping 3M double its production of N95 masks, the two companies have collaborated on the design and development of a new powered air purifying respirator (PAPR) that is going into production at Ford’s Vreeland manufacturing facility which is near Flat Rock, Michigan. According to Jim Baumbick, Ford vice president, Enterprise Product Line Management, there was close work with NIOSH to assure that this equipment would meet certification requirements. Approval for the use of the PAPR is expected by the end of April. 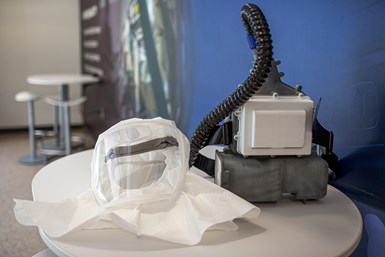 The device includes a hood and face shield and a high-efficiency (HEPA) filter system. The air blower system is similar in design to the fan used for ventilated seats in F-150s. According to Marcy Fisher, Ford director, Global Body Exterior and Interior Engineering, the power source is an off-the-shelf battery.

According to Baumbick, the objective is to work to meet the surge demand for these devices that they anticipate occurring at the end of April and through May and June.

In addition, Fisher said that working with airbag supplier Joyson Safety Systems, production of reusable gowns for health care works has commenced, using the nylon material that is ordinarily used for airbags. 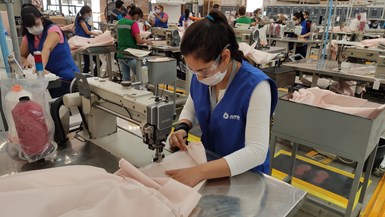 Ford worked with Beaumont Health in the design of the isolation gowns. Importantly, these gowns are washable up to 50 times and meet federal standards.

Production of the gowns is to reach 75,000 by April 19, then ramp to 100,000 the following week. It is expected that Joyson, which is performing the cut-and-sew operations, will hit 1.3-million gowns by July 4.

Another company that Ford is working with is Thermo Fisher Scientific. In this case, for the production of COVID-19 test collection kits.

According to Adrian Price, director, Global Core Engineering for Vehicle Manufacturing, Thermo Fisher people had heard about Ford working with 3M and GE and asked for some manufacturing support. So Ford people from the Kansas City Assembly Plant went to the Thermo Fisher Lenexa, Kansas, facility and helped setup additional collection kit production machinery. In addition, they helped adapt the equipment that had run glass vial production to plastic vial production, addressing a need for drive-through COVID-19 testing.

While some people might think of a transmission plant as a place that’s not particularly clean, making transmissions is a precision operation, and while there is certainly areas where there are fluids and dust and whatnot, the Ford Van Dyke Transmission Plant also has an ISO Class 8 cleanroom. There mask production is getting underway. This PPE will be distributed both internally throughout Ford—after all, this equipment is being produced by UAW personnel who need to be protected—as well as to the front-line responders in health care and public protection.

When asked about the whether the Defense Production Act has had any effect on what they’re doing, Jim Baumbick, says, “We saw the need in early days and we’ve been working on this.”

He elaborates, “Our mission: How do we help the great men and women who area fighting on the front lines and the first responders?”

And given what they’ve done in the first 25 days is nothing short of extraordinary.