Ford EcoSport and Other Automotive Endeavors

If you were to look at Ford’s vehicle sales through October (according to Autodata) you’d discover that second to the F-Series, the vehicle with the greatest percent of overall U.S. market share is the Escape crossover (1.8 percent; the F Series, incidentally, is 4.6 percent). Then after the Escape is the Fusion at 1.6 percent, then the Explorer at 1.4 percent. Following those vehicles are a whole bunch of numbers with a zero to the left of the decimal point. 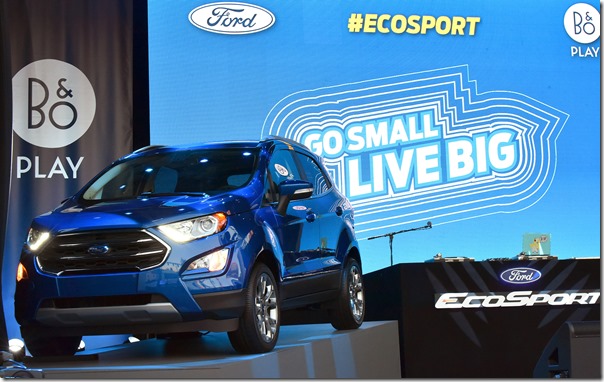 The point is, it is fairly clear that in the case of Ford—like other OEMs—the vehicles that have considerable appeal are in the SUV category. (The F-Series and its brethren over at GM and FCA are outliers, in a sense.)

Ford has the Escape, the Edge, the Expedition, and the Excursion in the SUV category. One might even throw in the Flex for good measure.

As a global company, Ford has more crossovers than that in its portfolio. Like the EcoSport, which has been in other markets since 2003.

This is a B- or subcompact crossover. Roughly about 8 inches shorter than an Escape (which is 178.1 inches long).

In other parts of the world, smaller is just fine. Possibly even preferred.

And this, Chantel Lenard, executive director, U.S. Marketing at Ford, says, is something that is occurred among certain categories of buyers in the U.S.

The desirable Millennials and the still-solvent Empty Nesters are looking for something smaller. And the case of both, there isn’t a desire to have less, as in stripped vehicles, but as much as—or more.

Which explains the EcoSport coming to the U.S. in 2018.

This vehicle is a re-engineered version. Eric Loeffler, is the chief program engineer for this third-generation EcoSport. He was tasked with making this crossover, which will be available around the world, appealing to the U.S. market (as well as other parts of the world, but there is specific tuning for the U.S., for example).

Lenard and Loeffler talk with John McElroy and me in a special “Autoline After Hours” that was shot just off of Hollywood Boulevard.

Then McElroy and I are joined by Karl Brauer of Kelley Blue Book and Bob Gritzinger of WardsAuto, and we discuss the importance of crossovers of all shapes and sizes, as well as some of the introductions at the L.A. Auto Show—or AutoMobility LA, as it is now being known.