Ford Motor Company is based in southeastern Michigan. Michigan, as residents know all too well and visitors often discover to their dismay, has roads with surfaces that vaguely resemble pavement, or at least that seem to have pavement surrounding large potholes. 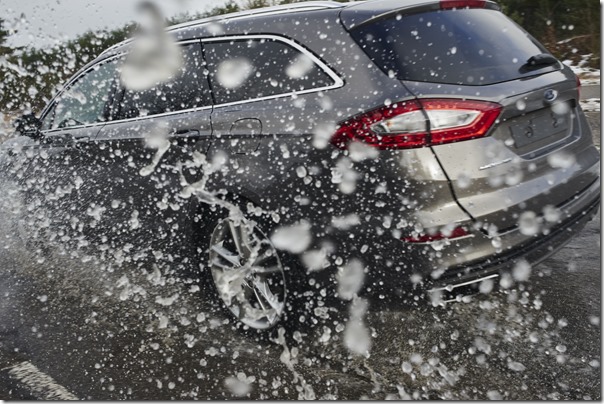 Be that as it may, Ford created a 1.2-mile section of road at its test facility in Lommel, Belgium that includes potholes from Europe and the U.S., as well as some 100 hazards from 25 countries.

According to Eric-Jan Scharlee, Ford durability technical specialist at the facility, “From a rutted traffic junction in China to a bumpy German side street, this road is a rogues’ gallery of the most bruising surfaces that our customers might encounter. By incorporating these real-world challenges into our test facilities, we can develop future vehicles to better cope with challenging conditions.”

During testing, they drive on the cratered and otherwise unpleasant surfaces at up to 46 mph.

This not only tests the mettle of the drivers, but the metal of the vehicles.

And consequences of the testing include Ford’s new computer-controlled shock absorber system that mitigates pothole jarring. The system is available on the 2017 Fusion V6 Sport. There are 12 high-resolution sensors that provide a controller with input. It adjusts the dampers every two milliseconds. For example, when a wheel is at the edge of a pothole, the dampers are set to their stiffest setting so that the tire and wheel doesn’t drop as far, which means that they don’t hit the opposite side of the pothole as harshly.

One only imagines that they could have simply used public roads around here for that development.