The use of sensors in the auto industry is not just related to the development of ADAS systems. At the Ford Valencia Engine Assembly Plant in Spain workers are putting on special skin-tight suits that are studded with 15 movement-tracking light sensors. There is a wireless detection unit that monitors the movement and four motion tracking sensors that capture the image of the worker in a 3D skeletal format. 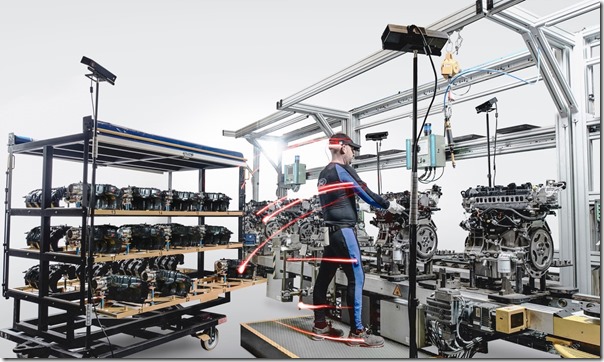 The workers perform assembly tasks and the information obtained by the system is analyzed by ergonomic experts who then can help modify the workstations so that they provide less stress on the workers.

The pilot system, which has so far involved 70 employees in 21 work areas, was developed by Ford along with the Instituto Biomecánica de Valencia.

Football—or soccer as its known in some parts of the world—is huge in Spain, which probably has something to do with an observation of Javier Gisbert, who is a production area manager at the Ford Valencia Engine Assembly Plant: “It’s been proven on the sports field that with motion tracking technology, tiny adjustments to the way you move can have a huge benefit. For our employees, changes made to work areas using similar technology can ultimately ensure that, even on a long day, they are able to work comfortably.”

An interesting aspect of this is where the idea that led to the suit came from: engineers were attending a trade show and saw a display showing how robots could replicate the movement of humans. As a result, they’ve come up with a better way of having humans move like humans in the assembly of things like 2.0-liter EcoBoost Duratec engines. 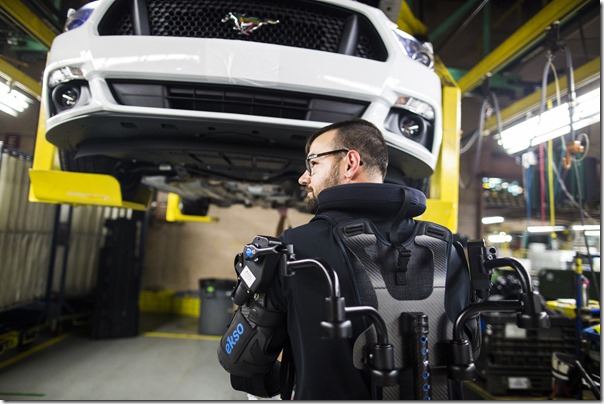 Now you may be aware of tech like this being used by director James Cameron for Avatar. There is the possibility that there are some Cameron fans at Ford because the company is rolling out globally the “EskoVest,” which is gear that assembly workers who perform overhead tasks in Ford plants are now donning. It brings to mind the Caterpillar exo-suit worn by Sigourney Weaver in Aliens.

Explains Jack Peurach, president and CEO of Ekso Bionics, “At Ekso, our mission is to augment human capability with wearable technology and robotics that help people rethink current physical limitations and achieve the remarkable.”

As in performing better vehicle assembly, not battling giant aliens.