Although they’re no longer able to prove out the performance of the vehicles they’ve designed, engineered and produced at places like Michigan International Speedway, Formula SAE students are still in the thick of competition
#tech #racing #GeneralMotors

Formula SAE, points out Chris Ciuca, Vice President of Programs at SAE International, is now 40 years old. This collegiate competition that has teams of students develop small open-wheel race cars didn’t start in, say, Detroit or Indianapolis or some other locale that might seem more automotive related. It actually started at the University of Texas at Austin. 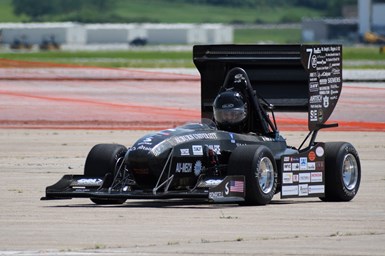 The competition is comprehensive. It is a matter of the complete development of a vehicle with the parameters being set (why it is called Formula SAE: just as a vehicle within Formula One has certain restrictions, so, too, does a Formula SAE car).

This isn’t just a matter of groups of college students building go-karts on steroids. This, Ciuca explains, is an exercise in STEM—Science Technology Engineering Math—and has been even before that acronym became bandied about.

The students have a series of competitions within the development process. No, these are not all drive programs (although there are those, measuring such things as acceleration, cornering, maneuvering, fuel economy and longevity), but also include design and manufacturability assessments.

As SAE describes it, “Teams are to assume that they work for an engineering firm that is designing, fabricating, testing and demonstrating a prototype vehicle.”

Ready for the “Real World”

In other words, the objective of Formula SAE is to get these students ready to go out into the industry after graduation—and Ciuca says that there are a number of companies that are involved in the competitions across the country for purposes of recruiting—which means that not only do the participants get “real world” experience by developing the vehicles, but potentially “real world” jobs when they graduate.

Of course, COVID-19 has had an impact on Formula SAE like other aspects of university of life. But Ciuca explains on this edition of “Autoline After Hours” that they have adapted to the closings of campuses and the restrictions on people getting close together.

Just as product development has been occurring in the auto industry for the past several weeks, Formula SAE has gone digital. The teams still compete, but they do so in a different way, one predicated on the sharing of files and Zoom meetings.

The experience may be different, but the objective is the same: Education.

Which is something COVID-19 can’t stop.

Ciuca talks to “Autoline’s” John McElroy, Jason Fogelson of ReviewGarage.com and me on this issue of the show.

In addition to which, John, Jason and I discuss a variety of other subjects, including GM’s impressive earnings (impressive in that the company didn’t lose money), the on-going viability of things like ride-hailing (e.g., Uber, Lyft), and whether in order to kick start demand for vehicles there will be something along the lines of “Cash for Clunkers, the Sequel.”

*If you saw this on the homepage of the website and wonder about who those exuberant people are, they are members of the Formula SAE Ecole Polytechnique Montreal team, which took the overall award in 2019. (Image: SAE)