Ballard once had as much attention as Tesla. (Well, maybe not quite that much, but. . . .) It may turn out that the fuel cell tech developer was right
#Ford #GeneralMotors #tech

A little more than 10 years ago, one of the hottest automotive technology companies on the planet was Ballard Power Systems, a Canadian company that obtained investments from both Ford and Daimler.

Ballard was in the business of developing fuel cells for powering vehicles.

Oddly enough, when Ballard Research was established in 1979 it undertook the development of high-energy lithium batteries, and arguably, it was the battery electric vehicle (BEV) that was to make the fuel cell vehicle comparatively anomalous in the industry (e.g., one could make the argument that if GM had continued its work on the development of fuel cells—and another “oddly enough,” it should be noted that the skateboard design that is the current architectural approach for battery electric vehicles was pioneered on the 2002 GM AUTOnomy concept—rather than shifting to the Volt, fuel cells might not be the odd man out. And it is worth noting that as far back as 1991 GM was working with Ballard on fuel cell technology). 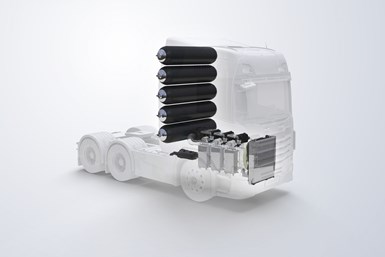 The point of all this is that while most all attention has been paid to the developments in battery technology (think of it: Last week Tesla held “Battery Day,” and even non-technical people watched it like it was the introduction of a new iPhone or something), Ballard has continued to plug along, working on its fuel cell tech.

Much of Ballard’s deployment of its PEM fuel cells have been for buses. Commercial vehicles are a sweet spot for things like fuel cell-powered vehicles as their routes are more deterministic than private vehicles (it is well established, say, where a bus will start from and end the day).

The company was pleased by the Chinese government’s recent announcement about its plans to fuel cell vehicle deployment. Said Randy MacEwen, Ballard president and CEO, “With a target to achieve one million fuel cell vehicles on China’s roads by 2030, this new fuel cell policy sets a framework for the scaled adoption of fuel cell electric vehicles [FCEVs].”

MacEwen added, “We believe this new policy signifies the strategic importance China places on FCEVs both from a decarbonization perspective as well as a competitive industrial perspective. The new policy comes just as the Weichai-Ballard joint venture has been recently commissioned in Shandong Province with annual manufacturing capacity in excess of 1 Gigawatt of fuel cell stacks. We believe the Weichai-Ballard joint venture is well positioned to become a leading fuel cell stack and module platform in China – the world’s largest market for commercial trucks and buses.”

Which leads one to wonder about what the fuel cell deployment will be like in the U.S. come 2030.

Mahle, which has been a supplier of fuel cells for the past several years, and Ballard Power Systems have announced that they’ve come to an agreement to develop fuel cell systems for commercial vehicles.

Dr. Jörg Stratmann, Chairman of the Mahle Management Board and CEO, said, “Hydrogen as a climate-neutral energy carrier is the solution for CO2-neutral mobility and the achievement of climate targets for medium and heavy commercial vehicles. Through our cooperation with Ballard, we will provide a strong stimulus to the development of fuel cell drives that are suitable for large-scale production.”

It will be interesting to see the interest in this tech in the U.S. market.