Fuel Savings in the Vineyards of Chablis

First let it be unambiguously noted that driving under the influence of alcohol is a heinous act, one that, according to the Centers for Disease Control, accounted for 9,967 deaths in the U.S. in 2014, or about one-third of all traffic fatalities that year.

That said, let’s move on to another subject, wine.

Or more specifically, the harvesting of grapes in the Chablis region of France, 6,000 acres of vineyards.

(No, you haven’t accidentally hit the Wine Spectator site.) 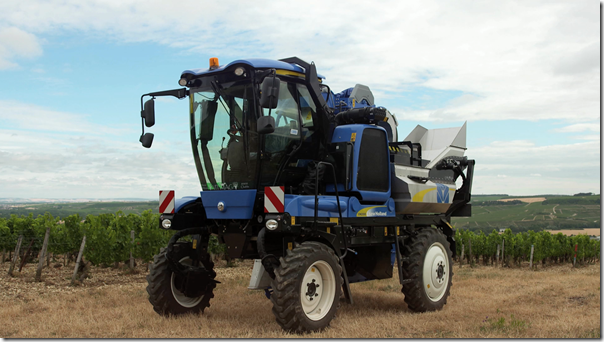 The relevance of this is that according to Phillippe Boisseau, marketing specialist, Olive and Grape Harvesters, New Holland Agriculture, 80 percent of the grapes picked in that region are done so mechanically.

There are two vehicles that CNH Industrial’s New Holland Agriculture has rolling through the narrow lanes formed by the trellises, the Braud VN2080 and the recently launched Braud 9080N. The machines have an extendable, variable frames on the tractor base units, which allows the frame size to match the width of the rows.

According to Boisseau, “A shaking system, designed to be as gentle as human hands, collects the grapes off of the grapevine canopy, feeding them into a set of baskets within the machine, which sort the grapes into two different hoppers – higher quality grapes into one and lower quality into the other to improve the quality of the wine produced.”

As in cars and light trucks, environmental issues come to the fore in this world of grapes.

This has led to the development of the ECOBraud system for grape harvesters and tractors, which is capable of reducing a vineyard’s carbon footprint by 40% which, in turn, translates into a 10 percent overall carbon dioxide reduction per bottle of wine.

In something of a variant of the start-stop system found on cars and trucks, the equipment uses a system that switches off the machine’s shaking functionality when it reaches the end of a row, thereby reducing fuel use.