Gas Prices on the Fourth of July

Today in the U.S. it is Independence Day. It marks the day in 1776 when the Declaration of Independence was adopted. (No, it is not to celebrate the 1996 aliens-attack movie that is only marginally better than its horrible sequel.)

It is a day of parades and flags. Of hotdogs, apple pie and, as the old advertising slogan had it, Chevrolet. (As Charlie Wilson put it when facing the Senate Armed Services Committee in 1953 as nominee for defense secretary, “for years I thought what has good for our country was good for General Motors, and vice versa.” Wilson was the CEO of GM at the time and was being asked to sell his stock in the auto company in order to take the position, so as to avoid conflict of interest. He did.)

Speaking of the Fourth and automobiles, it is interesting to note that according to GasBuddy.com, this past weekend saw the lowest average gasoline prices in the U.S. since 2005. 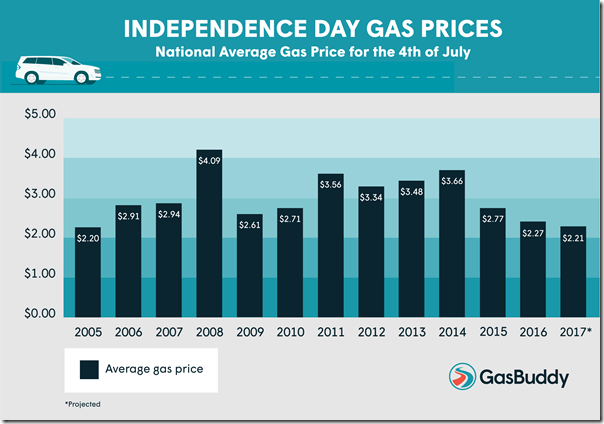 And the firm also points out that for the first time in the 17 years that it has been tracking gas prices, the cost of gas on the 4th is less than it was on January 1. The delta this year is 12 cents.

If we look at the average price over the 2005-17 period, the average price per gallon is $2.98. While a far cry from $4.09, it is something that needs to be kept in mind lest we become too complacent about that extra money we have in our wallets (which will quickly evaporate when we buy a box of popcorn at a summer blockbuster).