Honda is sometimes characterized as an engine company that wraps them in things like Accords and lawn mowers.

And it makes a wide range of generators. 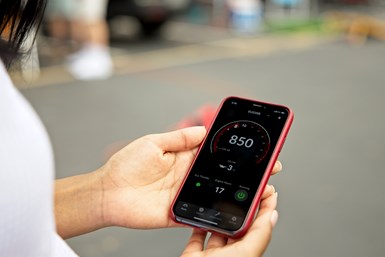 The Honda app allows control of a generator. (Images: Honda)

Honda Power Equipment, the part of the company that produces the machines, has developed an app for four of its electric start models, the “Honda My Generator Bluetooth App,” that allows users to remotely start, stop and monitor their equipment (e.g., output power, engine operating hours, estimated runtimes).

The app operates within a 75-foot line of sight between the smartphone and the generator.

It is interesting to note that one of the features on the 2021 Ford F-150 is an available built-in generator. Ford product developers acknowledged that lots of their commercial truck users have a Honda generator in the back of their pickups, so this is a way for them to get some of that business.

As FordPass allows the app user to start and stop the engine, presumably they have the same sort of functionality.

“While the total volume for the month will be down when compared to the August 2019 result—due to two less selling days and a change in the 2020 calendar with Labor Day events occurring in September this year—auto sales are expected to moderately improve from the month-prior levels. Auto consumers continue to be motivated by OEM incentives, 0% interest rates and government stimulus effects. The August seasonally adjusted, annual rate (SAAR) level should advance from the July reading of 14.5 million units. The IHS Markit calendar year 2020 projection stands at 13.6 million units as reflected in its August 2020 forecast release.”—Chris Hopson, Manager, North America Light Vehicle Sales Forecast, IHS Markit

Let’s take a breath for a moment.

Yes, the sales aren’t catastrophically down. But if you look at the numbers of companies like Toyota—down 22% compared with August 2019—and Honda—down 21.8% compared to the same period last year—it is clear that losing a fifth of your business isn’t exactly a sustainable thing.

What’s more, note how Hopson noted the help of the OEM incentives and 0% interest rates. Again, not a recipe for sustainable business.