Not only is GM increasing its electric vehicle portfolio, it is working with EVgo to build out charging infrastructure
#Chevrolet #Cadillac #GeneralMotors

Said another way: Consider the existing fast charging network and triple it. 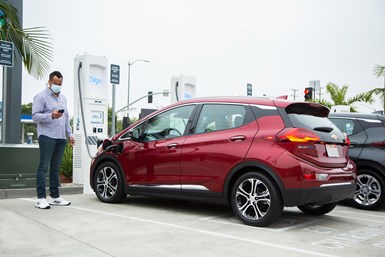 GM and EVgo will be building out more charging stations. (Images: GM)

The build-out of the new stations will occur over the next five years. The first will be available in early 2021.

And for those who are interested in being “green,” it is worth noting that the new EVgo fast chargers will be powered by 100% renewable energy.

Mary Barra, GM Chairman and CEO, said that the corporation is committed to “an all-electric, zero emissions future.” And that not only are they working on developing vehicles but addressing the infrastructure: “We know how important the charging ecosystem is for drivers, one that includes access to convenient and reliable public fast charging. Our relationship with EVgo will bolster the public fast charging network available to EV customers ahead of increased market demand and reinforce our commitment to an all-electric, zero-emissions future.”

According to Cathy Zoi, EVgo CEO, the company was a first-mover in the charging space—and was a first learner, so the company knows what consumers want in a charging experience. 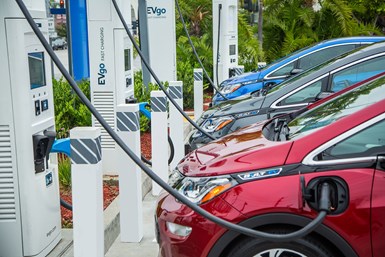 Yes, these are all Chevolet Bolt EVs. But the GM-EVgo build out will be available to all makes of EVs.

And with this announcement there will be even more accessibility.

Barra said, “Our commitment is to make sure EV customers have everything they need.” As in electricity in this case.

She also said, “In order to have confidence as having an EV as an only vehicle there needs to be robust fast charging available.”

Barra went on to say, “We believe charging should be open to everyone.” So these charging stations are not just limited to GM vehicles.

In January 2020, AAA released the results of a study of EV owners. Earlier studies the firm had conducted showed that people didn’t buy EVs because (1) they didn’t think there were enough places to charge and (2) they would run out of charge while driving—probably because of (1). And these two reasons were extremely close: 58% and 57%.

Greg Brannon, AAA’s director of Automotive Engineering and Industry Relations, said, “Range anxiety has been synonymous with electric vehicles from the beginning. Hearing firsthand from owners that this is no longer a worry may change the mind of those who have otherwise been skeptical to the idea of owning an electric vehicle.”

That is, they found that 95% of the EV owners surveyed said they never ran out of charge while driving. And as for the availability of charging, 75% said they did it at home.

Clearly, by making a massive increase in the number of available charging stations, GM and EVgo are going to more than satisfy—at the very least—the 25% who charge on-the-go.

Zoi said that there is a focus on metro areas with the citing of these new chargers because they are “seeing an increase of EV purchases by people who live in apartments.” Who likely can’t charge at home. What’s more, Zoi said, “We are seeing an increase in EVs being used by rideshare drivers.” She said that while a typical EV driver may charge once a week, a rideshare driver may charge every day.

What Will It Take?

While it is certainly important for consumers to have confidence that if they’re driving an EV they’ll be able to get it charged, there is another very important element: Desirability.

If Tesla has proven anything it is that people will buy cars with great styling. 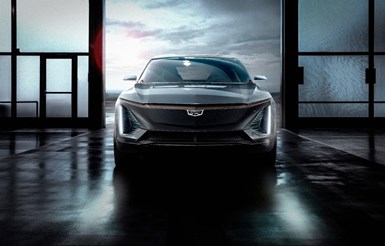 A rendering of the Cadillac Lyriq. Combining style with electricity.

Which GM recognizes, as Barra said: “We are moving quickly to bring new EVs to market that customers will love.”

The company has announced it will have 20 EVs launched by 2023, including the Cadillac Lyriq SUV and the GMC Hummer EV.

Given the interest in these vehicles it is clear that GM has gotten the message about products that combine styling with electricity.