When it comes to its U.S. sales of electric vehicles, GM’s future is undoubtedly going to be brighter than its past. Let’s face it, last year the company delivered 18,019 Chevrolet Bolt EVs, which is even less than the number of Corvettes that rolled off the lots (18,791), and the Corvette is a car with a similarly limited consumer base. Even if Chevy Volt sales are added to the Bolt EV’s, the addition of 18,306 brings the total to a paltry 36,325, or about the total number of Cadillac Escalades sold in 2018 (36,872). 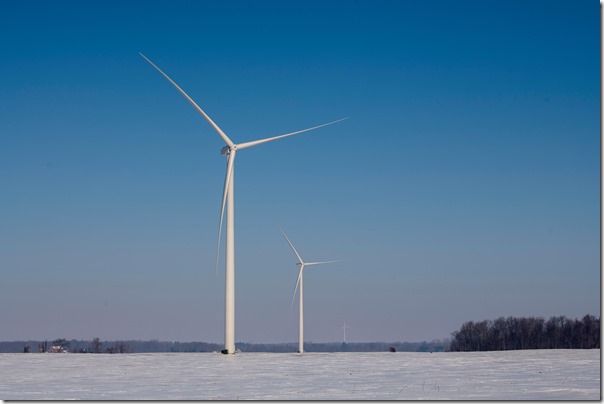 A DTE wind park in Michigan

That said, GM is clearly committed to, as they say, kicking fossil fuel, although it seems that it is going to be doing so somewhat more aggressively when it comes to structural uses rather than vehicular.

GM has signed an agreement with DTE Energy in Michigan for 300,000 MWh of energy that will be generated by the wind.

That quantity is enough to provide the electrical needs of both the GM global tech center in Warren, Michigan, and the GM Renaissance Center HQ in downtown Detroit.

Explained Rob Threlkeld, global manager of Sustainable Energy and Supply Reliability for General Motors, “Our partnership with DTE Energy will help us get closer to achieving our goal of powering all our operations in Michigan with 100 percent clean energy.”

Bigger than that, Threlkeld said the GM objective is that “renewable sources will account for 100 percent of our global energy footprint by 2050.”

Presently GM gets about 20 percent of its energy needs from renewable resources.

Amusingly enough, a few days before the GM-DTE wind power announcement was made southeastern Michigan was hit with what is described as a “bomb cyclone,” which had sustained winds of up to 40 mph and gusts in excess of 60 mph for more than 20 hours.