GM, no stranger to electric vehicles, is getting ready for an extensive build—and will start next year
#Cadillac #Chevrolet #Ford

Mary Barra, GM chairman and CEO, couldn’t have been more clear: “We want to put everyone in an EV.”

And so they’re making a huge commitment to the effort, investing on the order of some $20 billion in electrification (and automation) through 2025 on the effort. And while “everyone” may be a bit of an exaggeration, she specified that the intention is to sell 1-million vehicles per year (in North America and China) by mid-decade. 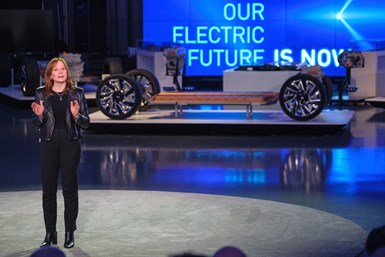 The company is taking what she described as “a holistic approach to EV systems,” which means that not only are they working on the vehicles—EV specific, not retrofits of current architectures—and batteries—taking a vertically integrated approach so as to have deep knowledge of the electronics and chemistries—but also helping to work to build out infrastructure.

(E.g., they are adding some 3,500 EV charging plugs at its U.S. and Canadian facilities, which is tripling the current number.)

And there is a recognition that they need to not only make vehicles that are compelling, but affordable.

One means by which they’re doing this: scale.

Mark Reuss, GM president, pointed out that when it comes to vehicles powered by internal combustion engines, there are some 550 combinations in production; they’ve identified 19 propulsion modules. So by reducing complexity, they are able to create volume, with volume comes the ability to reduce costs. 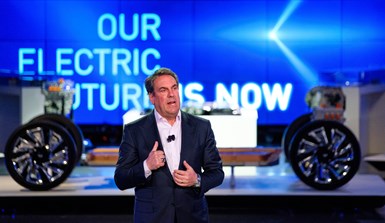 Mark Reuss explains that the resources of GM are being organized to develop and build efficient and profitable electric vehicles.

And on the subject of cost reduction, they have developed what they’re calling “Ultium” batteries, which are predicated on pouch-style cells that use a low-cobalt chemistry, nickel-manganese-cobalt-aluminum (NMCA). Not only does this chemistry help GM regarding the supply chain, but it will help drive down the cost of batteries to, Barra said, below $100 kW/h.

Notably, the company, along with partner LG Chem, are building a $2.3-billion plant—about the size of 30 football fields—in Ohio to mass-produce batteries. According to Barra, the company could sell batteries to other vehicle manufacturers and ride-share companies.

And also driving down cost in the Ultium battery is that by embedding the electric control within the battery they’ve significantly decreased the amount of wiring (e.g., compared with the setup in the Bolt EV, an 80% reduction).

A word about the platform. They’ve developed a third-generation modular platform that Reuss said is capable of handling everything from luxury vehicles to work trucks.

And speaking of vehicles, they are going to be rolling out a number of new vehicles, starting with a variant of the Bolt EV, the Bolt EUV, a crossover, which will go into production in 2021, the Cadillac Lyriq, a compact crossover coming in 2021, the GMC HUMMER EV SUT (a four-door truck with a short bed), which will go into production late in 2021 (at the GM Detroit-Hamtramck Assembly plant, which is being converted via a $2.2-billion investment to an all-electric vehicle production facility), the hand-built Celestiq luxury sedan (possibly to be built at the GM Technical Center), and electric midsize crossovers for both Buick and Chevrolet.

Barra said, “We are just getting started.”

Remember. The company started offering the EV1 to consumers in 1996.

She also said that they plan to be profitable with their first generation of vehicles.

While the breadth of products—both at the battery level and at the vehicle level—is impressive, it shouldn’t be forgotten that Volkswagen Group, especially with its Volkswagen brand, is undertaking what could be considered an even more massive execution of EVs of all shapes and sizes.

What’s more, in July Ford and Volkswagen announced an alliance, part of which will have Ford using VW’s modular electric toolkit (MEB) platform and electric vehicle architecture to produce “at last one high-volume” EV for European customers in 2023.

Electric vehicles are going from niche to more widespread and the timing is getting quicker and quicker.