Congrats to those who are there. . .but where are some others. . .?
#Hyundai #Nikola #Nissan

The Good Design Awards for 2020 have been announced, and in the car and transportation design category, there are a number of familiar OEMs who have achieved the nod from 18-person internationally jury (including Chris Bangle, who has been directing Chris Bangle Associates S.r.l. since leaving BMW in 2009). 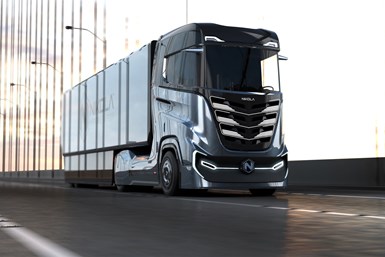 Genesis vehicles awarded are the G80 and the GV80. Ferrari, the Roma. Hyundai for the new Elantra and for two concepts, the 45 and the Prophecy.

Lucid garnered an award for the Lucid Air. (In addition to which, the car was also named the “Best Car Design for 2020,” citing the work of Derek Jenkins, who heads design for the firm. Speaking of the electric vehicle’s design, Christian Narkiewicz-Laine, architecture critic and chief curator of The Chicago Athenaeum’s Good Design. said, “Jenkin’s amazing muscular design for Lucid Air is a stunning break-through vehicle from the otherwise dull, monotonous American car industry as we know it.”)

Kia took two: for the K5 and the Sorento. At least some good news for Nikola: the Tre truck is awarded. And Nissan picked up one for the GT-R 50. 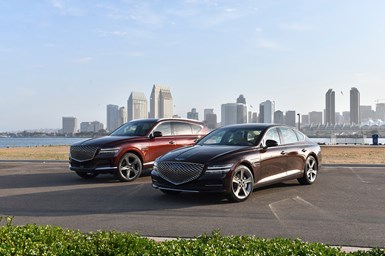 The Genesis G80 (foreground) and the GV80 behind it. Both win Good Design awards. (Image: Genesis)

While Pininfarina is on the list of winners in the Transportation category, one of the Good Design awards went to it for the Residenza, a home electric vehicle charging station, and the AutonoMIA, which has something to do with being an in autonomous vehicle (it “collects data about the user’s experience that will provide insight into the user’s mindset and reactions, allowing us to refine—and even perfect—the traveling experience”).

What’s interesting to note is the absence of either mainstream U.S. (Lucid and Nikola are U.S.-based companies, but neither has actual vehicles on the ground yet, outside of pre-production vehicles) or German vehicle brands on the list of winners. There isn’t a single global OEM that doesn’t hold forth on the importance of design, so you’d think that at least one of them would have impressed the judges. Which evidently didn’t happen.

2020 is the 70th anniversary of the awards, which are presented by the Chicago Athenaeum Museum of Architecture and Design and Metropolitan Arts Press Ltd.

The awards are presented to the best industrial and graphic designers in the world—during its run objects from a paper clip to the Boeing 787 Dreamliner have been honored.

There is no ranking to the awards. According to the organization, “Either they are recipients of the Good Design Award or they are not.”