Hyundai’s head of Interior Design had stints at Honda and Ford in the U.S. before moving to Hyundai’s Global Design Studio in Namyang. And we sat down and talked with him about his experience and the 2020 Sonata.
#Ford #Hyundai #Lincoln

Unquestionably, among global automotive companies, Hyundai has a strong position vis-à-vis the designs that it is consistently executing for its vehicles. While some would argue that the seventh-generation, 2015 Sonata was a bit of a retreat from the bold design statement of the sixth-gen, 2011 Sonata (i.e.,

Fluidic Sculpture 2.0 was something of a watered-down version of 1.0), there can be no question that with the eighth-generation, 2020 Sonata, the Sensuous Sportiness design language brings back the design reach of the seventh-gen model—and then some—both outside and in. 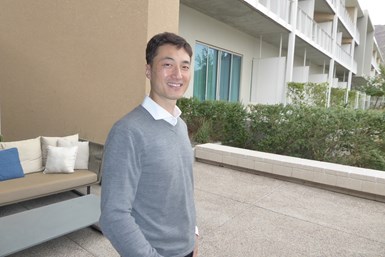 One of the people who was instrumental in the execution of the design of the 2020 Sonata is Ha Hak Soo, Vice President, Head of Hyundai Interior Design Group/Head of Hyundai Commercial Vehicle Design Group, and we had an opportunity to catch up with him when he left the Namyang Design Studio in Korea to participate in the launch of the new Sonata.

AD+P: Tell us about your background.

Soo: In 1997 I graduated from Art Center. My first job out of school was at Honda in Torrance. I worked there for about 4 years as an exterior designer. From there I moved to Ford in Dearborn. I was there for 14 years. I realized that if I really wanted to get into automotive design and development, I needed to be in Detroit. So I moved when the opportunity came.

AD+P: What did you work on at Ford?

Soo: The first project at Ford was the first-generation Fusion, Mercury Milan and Lincoln Zephyr exteriors. I spent two years in the Advanced Studio.

I worked on the second-generation Edge and MKX program.

AD+P: Those were exterior projects. Yet you’re now heading up interiors for Hyundai. Why the switch?

Soo: On the Edge/MKX program I saw the first Ford MyTouch—all the bells and whistles of the interface. I came to realize that more breakthroughs are going to happen on the inside of vehicles. So I migrated to the interior design studio. I worked on the current Edge and MKX interiors. And Taurus interior. Also the Kuga. Escape. EcoSport.

A funny thing is that when I left Ford in 2015, I was working on the new Explorer interior. Then I joined Hyundai and I started on the all new Santa Fe interior. Also I did the Palisade interior.

AD+P: The Explorer and the Palisade came out at about the same time. How’s that possible?

Soo: It shows the development pace at Hyundai is a lot quicker than at Ford. 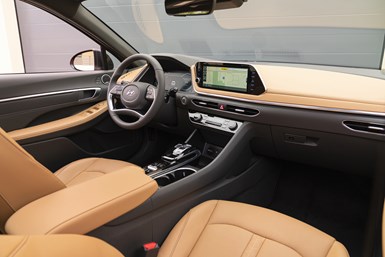 Inside the 2020 Sonata: making an interior to appeal to someone looking for something special. (Image: Hyundai)

AD+P: You’ve had the opportunity to work at Honda, Ford and now Hyundai. What are the differences between their approaches?

Soo: Obviously each company has its own native language and different cultural background. But the essence of car design and production feasibility is similar. Processes are different. Timing is different. But the development process is similar.

Honda is a very well organized, small, tight organization. So all of the production timing, new full model change or mid-cycle—it all comes very much like clockwork. Very predictable. Nothing out of the ordinary.

At Ford, you might have a launch schedule, but if a new technology comes along or something happens in the company, then the timing keeps on changing. It is a little bit more fluid. A little bit more flexible.

At Hyundai, Job One never changes. In fact, it may move up to coincide with a significant event. The launch of the Nexo [the fuel-cell-powered, compact SUV] was moved up because of the PyeongChang Winter Olympics.

AD+P: What about differences in terms of regions? Is there a single global design language?

Soo: Car design is universal and global but there are unique characteristics. Japanese companies, based on my experience, put a lot of emphasis on the process. Sometimes more so than the final result. They give more emphasis on the process and how they get to the final result. That is very important to them. They get very philosophical about how they develop a new car, what efforts go into it.

For an American company, based on my experience at Ford, the typical American spirit of innovation and trying something new and having lofty goals is very important. But at the same time the American car buyers are conservative. They don’t want big changes. They appreciate the technology, but they want the convenience of knowing everything works the way they remember.

In the Korean car culture, they want everything new every time. They don’t have an appreciation of a tradition or heritage like the Europeans or Americans. They want something very fashionable. New.

Chinese are the same way. They are very open to embrace new technology, new gadgets. They don’t mind if it is a little inconvenient or difficult to use as long as it is cool and has the fresh look and experience. They embrace it.

So it is different even though more and more we are becoming a global society. Regionally there are characteristics embedded.

AD+P: Tell us more about your change from exterior to interior design.

Soo: When I first started at Ford I drove the 2002-2003 SVT Focus and then 10 years later I had the Focus ST. So in 10 years, even at a very conservative company like Ford, the interior change was day and night. But the change is even more exponential these days. More computing. More creature comforts. More infotainment systems. Ten to 15 years ago we didn’t even think about cupholders. Now things are constantly changing and evolving. It’s a pretty exciting time. The 2020 Sonata: Both the exterior and interior designs were executed to appeal to customers who are interested in what a sedan can provide. (Image: Hyundai)

AD+P: Talk about the execution of the 2020 Sonata.

The midsize sedan is declining market so we had a good challenge—how do we bring people back to the Sonata, into the sedan in general? Five to 10 years ago Sonata was considered a family car, but that’s no longer the case. Now the SUV is the family car. So we looked at the Sonata from a different point of view. We tried to imagine who’d drive a Sonata. We figured it would be people who are single, empty nesters or working professionals who don’t have to carry many people or haul a lot of stuff. These are the people that hopefully enjoy driving and want to take in the benefits of the ride and handling quality of a sedan vs. an SUV or minivan.

AD+P: What about the interior?

Soo: The interiors of SUVs are becoming more premium and car-like. But there is the intimacy we can bring into a sedan like the Sonata. The Palisade interior we thought of it as a grand living room or family room. Sonata we thought of it more like a personal space for the driver or at best sharing space between driver and passenger. We really focused on that cockpit area. We tried to make it more intimate, more personal.