The Infiniti Prototype 9, which is going to be part of the marque’s exhibit at this weekend’s 2017 Pebble Beach Concours d’Elegance, is interesting for a number of reasons, not the least of which is that although this has the look of the 1940s, it has powertrain technology of right now: it features a 120-kW electric motor that’s powered by a 30-kWh lithium-ion battery pack from Nissan’s Advanced Powertrain Department. 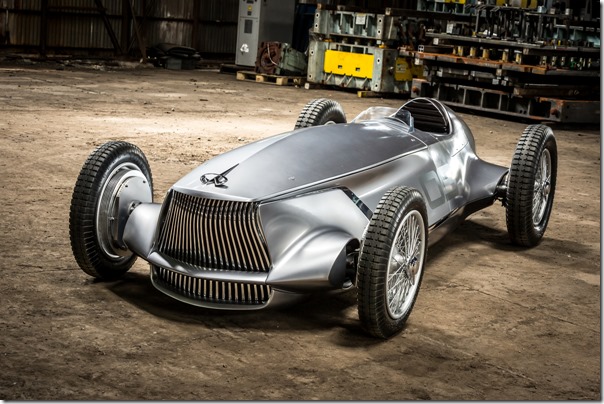 This is an interesting approach to conceptualizing the design of a vehicle. According to Alfonso Albaisa, senior vice president, Global Design, Nissan Motor Corp.: “We discussed the idea of ‘chancing’ upon an unrecognized race car, hidden away for decades in a barn, deep in the Japanese countryside. We wanted to explore what this looked like, what it would have been made of.”

And it is that last—“what it would have been made of”—that is of particular interest.

Although many aircraft of the 1940s—and there is something of a fuselage to the design of the Prototype 9--were made of aluminum, the skin of the vehicle is steel, as is the ladder frame below it.

The vehicle was constructed in a section of the Nissan Research Center in Oppama, Japan. The steel body was hammered out by Nissan craftspeople called “takumi.” For one thing, there were no stamping presses available, and if there were, it would have undoubtedly taken a considerable amount of time to create the dies that could achieve such deep draws as required by the body design. (Although if you look carefully at the photo, it appears as though there is a die set behind the vehicle—look at the yellow rectangle.) For another, it is fairly obvious that this is a one-off vehicle that they wanted to create with more than a modicum of care. 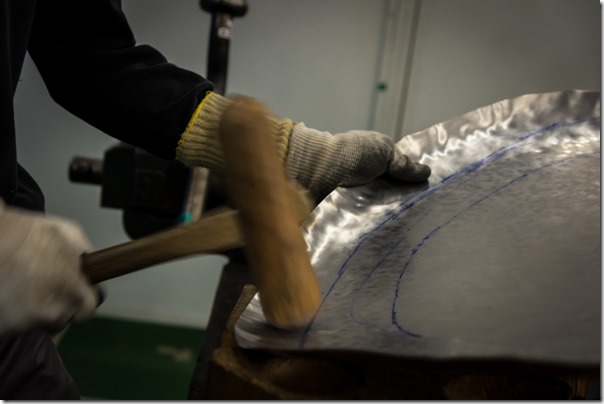 Albaisa: “The beautiful execution of Prototype 9 represents a combination of artistry, craftsmanship and commitment to a romantic notion of our heritage. It inspired our people to work on Prototype 9 in their own time – as they were completely invested in the project and the details and features originated with them. Prototype 9 has been a labor of love for many of us.”

Assuming that it’s driven on a track the way a race car is meant to be, its battery would last 20 minutes. (This, incidentally, is not all bad, as in the Formula E series, a race lasts 50 minutes and there is a mandatory pit stop—for a vehicle change.)

The Prototype 9 has a mass of 1,962 pounds. One wonders what it might have been had it been hammered out from aluminum sheet.