One of the biggest understatements that can be made is that automotive production operations—say an engine plant—are highly complex networks of people, machinery, controls, communications, and work in various states of process.

Take the FCA Trenton Engine Complex. It is even called “complex” in its name. This is a two-facility operation, There is Trenton South. It covers some 822,000 square feet. The 3.6-liter Pentastar V6 is produced there for vehicles ranging from the Jeep Wrangler to the Dodge Charger to the Ram 1500. 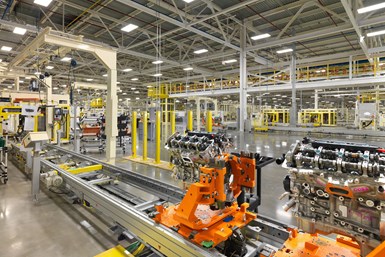 All in there are some 1,800 people working at the complex.

Making it all work is not simple task.

Over the years, there have been an array of means to manage operations. There are manufacturing execution systems (MES). Enterprise resource planning (ERP). There is statistical process control (SPC) software. And more.

Jeff Trumble started his career on the factory floor at Ford. He spent 10 years as a blue-collar employee, so he knows how manufacturing works.

He is now the CEO of Trumble, Inc., a company that produces a product that he says can improve manufacturing operations though the use of AI, IoT, the Cloud, Big Data, and, just as importantly, the people on the factory floor who are there, capable of responding when things are drifting out of spec (they’re notified by smartphones that include an app—can’t leave that off the list of the advanced tech tools).

It is more than the guy whose name is on the door saying that it works. Places like the FCA Trenton Engine Complex are benefiting from it. We know because “Autoline After Hours’” John McElroy talked to the plant manager and asked about it.

And on this edition of “Autoline,” John, Bob Gritzinger of Wards Intelligence and I ask Trumble about it.

Trumble describes what they’re offering as “proactive factory control.” Information is automatically obtained from equipment and real-time determination is made as to whether things are operating to spec and whether there are any indications that things might be changing. This, then allows fixes before there is the production of a whole lot of scrap. By having confidence things will be made as and when scheduled, things like expediting can be minimized, if not entirely eliminated.

While this exploration on this edition of “Autoline After Hours” is, admittedly, a bit production-operation-geeky, it is a useful look at the challenges of actually manufacturing the cars, SUVs and trucks we all drive.

Then during the second half of the show John, Bob and I discuss a variety of topics including the just-revealed Hyundai Elantra—the seventh generation of a compact sedan that has an exterior design and on-board tech that is more than a class-above; the just-revealed Kia Sorento—the fourth generation of the midsize SUV that also has impressive design and loads of tech. Hyundai is serious about compact sedans, as the forthcoming Elantra indicates. (Image: Hyundai)

Hyundai is serious about compact sedans, as the forthcoming Elantra indicates. (Image: Hyundai)

And we talk about how it is that Hyundai and Kia are really on a tear as they compete in segments that others are pretty much giving up on (e.g., compact sedans) and creating vehicles that are winners right out of the box (e.g., the first-ever Kia Telluride won the 2020 North American Utility Vehicle of the Year award against stalwart traditional competitors).

And there is a whole lot more on the show, in which we deliberately minimize the COVID-19 coverage, and which you can see right here.