If Honda is anything, it is an engine company. It produces engines and then packages them into all manner of things, ranging from Accords to lawn mowers, from Acuras to power generators. Even jet planes.

If there is any company that has notable expertise in internal combustion engines (ICEs), it is Honda. It has been working to perfect them since the late 1930s, when Soichiro Honda was a mechanic who went on to start a piston ring manufacturing company before establishing Honda in 1946.

You’d think that if there was any company that would be all about maintaining the dominance of ICEs it would be Honda.

And if you thought that, you’d be wrong. 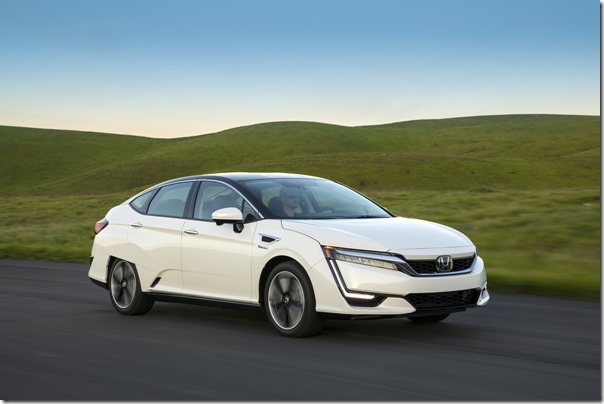 Because Honda is but a handful of auto companies that is not just working in engineering facilities and labs to develop alternative powertrains, but has been, for more than 20 years, working on putting those powertrains on the road.

Its latest efforts include the 2017 Clarity Fuel Cell, a five-passenger sedan that’s larger than an Accord, has a 366-mile range, and is rated at 68 MPGe city/highway combined.

With the exception of being fueled with hydrogen, it is a very nice, stylish, “normal” car.

Oh, and the emissions are water vapor.

While there seems to be a somewhat fuzzy, politically oriented waning of interest in reducing emissions and increasing fuel economy, there’s Honda, not merely staying the course, but driving forward. The Clarity Fuel Cell, which is being made available in places like California because that’s where the hydrogen fueling infrastructure is, will be joined, in short order by the Clarity Plug-In Hybrid and the Clarity Electric.

Steve Center is vice president, Environmental Business Development Office, American Honda Motor Co. And on the latest edition of “Autoline After Hours,” Center brings a Clarity Fuel Cell to the studio and spends the entire show talking with “Autoline’s” John McElroy, Henry Payne of the Detroit News and me about the car. We discuss everything from the exterior styling to the interior amenities to the drivetrain of this remarkable car.

And given that Center has long been Honda’s point person in the U.S. dealing with environmental vehicle developments, he talks about the challenges and commitments that Honda is facing and making when it comes to creating vehicles like the Claritys.