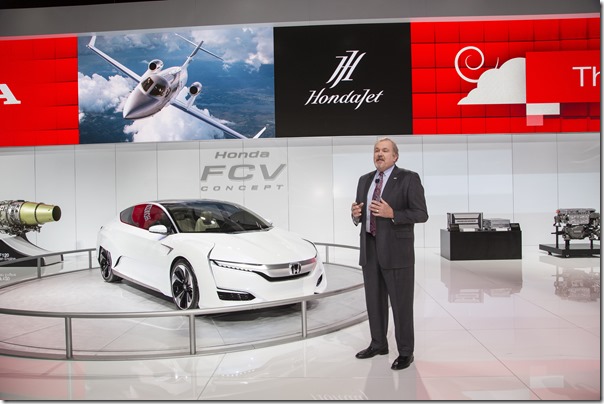 And while the common wisdom would have it that cars are becoming sales-proof as consumers make the switch to crossovers and SUVs, in the first quarter of this year Civic sales are up 30 percent compared to the same period last year and Accord sales are up 12 percent. And the Honda approach is to sell vehicles to individuals, not fleet buyers. Which means that, as Mendel observes, the Civic and the Accord are the top-retail selling cars in their class three years running.

But there is another thing that’s interesting about Honda.

Mendel: “Honda is one of only two automakers today that is meeting our federal fuel economy targets without the benefit of credits or offsets. In fact, we have the largest margin of improvement of our CAFE requirements of any full-line automaker.”

But Mendel also admits that there were problems in terms of having the manufacturing capacity—both at the Honda level and at the supplier level—to produce more Accord Hybrids.

You might think that the company would shy away from that exercise again. 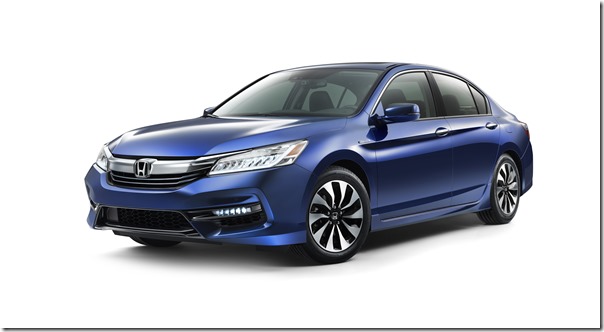 But to the contrary, it is launching the 2017 Accord Hybrid this spring. The new car, which will be positioned as the “ultimate” Accord, has a two-motor hybrid, as its predecessor did, as well as the 2.0-liter Atkinson Cycle engine. But the motors, the li-ion batteries and the engine have been all improved so that (1) the 212 hp is a 16 hp increase over the previous model and (2) the estimated EPA fuel economy numbers, based on the 2017 EPA testing regimen, will be 48/45/47 city/highway/combined, which are a +1/+2/+1 mpg increase over the previous model. But Honda’s not done. Not by a long shot.

Honda has been developing its fuel cell vehicle, the Clarity, for a number of years. In March the vehicle went on sale in Japan. Later this year it will launch in the U.S. market. This is a five-passenger vehicle that has a range that is estimated to be greater than 300 miles. They’re looking at an MSRP on the order of $60,000 and a lease of less than $500 per month.

Similar to the sort of improvements found in the new Accord Hybrid, the Clarity Fuel Cell has a 60 percent increase in power density compared with its predecessor. The fuel cell powertrain is about the size of a V6 engine and fits completely under the hood of the car. 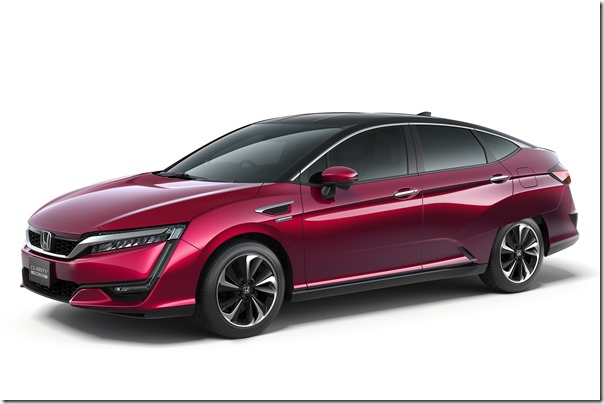 This is packaging is of importance because Honda is using the underlying platform for extensions to the Clarity lineup: a Clarity Electric and a Clarity Plug-In. Both of these models will be on the road in the U.S. by the end of 2017.

Mendel: “This shared platform strategy will enable Honda to more efficiently respond to infrastructure and market developments, provide customers nationwide with an ultra-low carbon vehicle that meets their lifestyle needs, and take us toward higher volume sales of advanced alt-fuel products.”

What they’re doing, is leveraging their scale: by having three distinct powertrain variants (and recognize that these variants are a whole lot different than a four- and six-cylinder engine or even a spark-ignition versus a combustion-ignition engine) but the same fundamental underpinnings, they are able to spread their engineering and development costs, thereby being more cost effective. At the same time, by providing these choices, people who live in markets that currently don’t have a hydrogen infrastructure (which is approximately everywhere but California) can go for the full electric vehicle or the plug-in; people who are in California might opt for any of the three.

When asked whether he thought that 350,000+ pre-orders for the Tesla Model 3 would have a negative effect on the prospects of the Clarity series, Mendel laughed and said that producing that number of vehicles will be a real challenge for Tesla. “It would take us a while. And we’re kind of geared up for that.”