Domino’s Pizza had its start in 1960 in Ypsilanti, Michigan. The company has been delivering pizzas ever since, now from some 12,100 stores, 5,000 of which are outside the U.S.

Needless to say, Domino’s has gotten pretty good at understanding the ins and outs of pizza delivery.

As Russell Weiner, president of Domino’s USA, explains, about four years ago they started thinking about the whole delivery process. They started wondering about having a vehicle specifically tailored for the needs of Domino’s drivers (who are described in Domino’s language as “Delivery Experts,” or “DXPs,” for short). 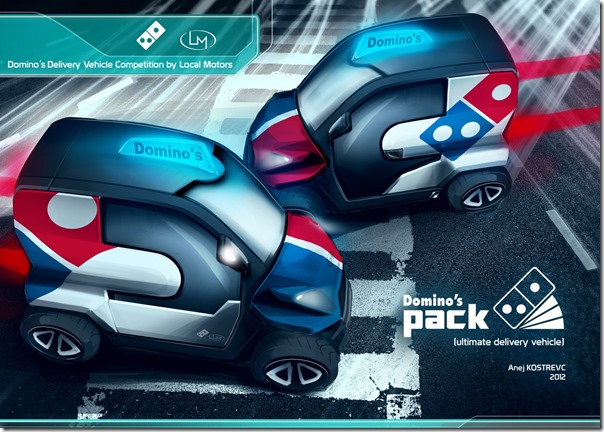 Know that about two-thirds of Domino’s business is based on delivery, and that in the U.S. alone Domino’s drivers rack up 10-million miles a week. (Yes, week.)

So, he says, they solicited information from the drivers about what they’d look for in a vehicle and then contacted Local Motors to establish a crowdsourcing design contest for the delivery vehicle, “the “Domino’s Ultimate Delivery Vehicle Challenge.”

They received 385 entries from around the world. The winner of the challenge, Anej Kostrevc, is in Slovenia. Which is a long way from Ypsilanti. (Or Ann Arbor, where Domino’s is now headquartered.)

To get some automotive domain expertise, Domino’s brought on Ken Baker, who was formerly of General Motors, and who was one of the key drivers of GM’s electric vehicle program, which resulted in the development of the EV1.

Weiner admits that he was surprised at the level of difficulty involved in developing a vehicle. 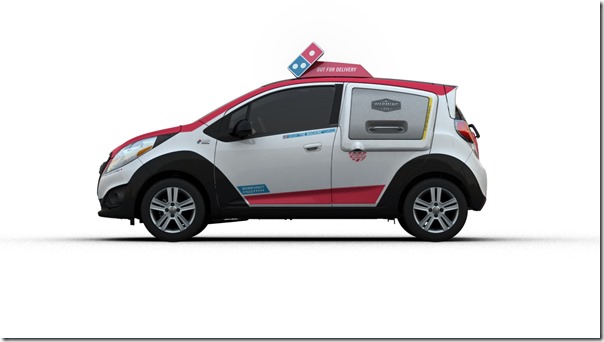 To help make the delivery vehicle real, they engaged Roush Enterprises, a Livonia, Michigan-based company with extensive vehicle development expertise (everything from Mustangs that are fast enough to curl your hair to the Google Car).

Weiner also acknowledges that the amount of money involved in creating a car is breathtaking.

They decided to start with a 2015 Chevrolet Spark to create the Domino’s DXP—yes, they named the vehicle after the drivers.

The vehicle is comprehensively modified, with the passengers’ seats giving way to a warming oven, different fascias, and even pizza-themed wheels.

Weiner emphasizes that the DXP isn’t simply some marketing vehicle that would show up at state fairs or in parades. It is a working tool for the Domino’s deliveries.

He explains all of this and more to John McElroy of Autoline, Jeff Green of Bloomberg and me on this edition of “Autoline After Hours.”