Peter Thom tells a story of development that is truly startling, the likes of which he hasn’t experienced in his years in the industry.

Thom is GM vice president, Global Manufacturing Engineering, and he explains that in the ordinary course of events, the activities of the Manufacturing Engineering team are: “We source, implement and install machinery and equipment for our plants around the world. When there is a new vehicle, we work with the plants, putting in the equipment that is needed and help launch the new program.”

But today is not the ordinary course of events. 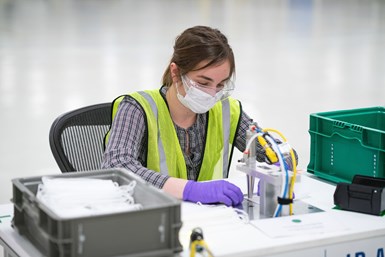 “We never stopped to think about whether our skills and capabilities could be applied to another industry,” Thom says.

But then they just did it, applied them to something that was not a car, crossover or truck.

“We heard that one of our JVs in China, SGMW [a venture between SAIC, GM and Wuling Automobile] was making face masks,” Thom says. “That’s about as much as we knew.”

They found out about that on March 18, a Wednesday.

Thom had his people working in China for the JV to find out what they could about it.

On Friday of that week, based on the information they obtained—sketches and drawing of a machine that had been specially built in China to make masks—Thom gave his people in the U.S. the challenge: get something up and running within a week.

“Why would we be any slower?” he asks, rhetorically.

So based on the information they had in hand, they contacted an automation supplier that they’d ordinarily use for automotive parts and systems assembly, JR Automation, and asked the people there if they could build the automation needed for mask production—in a week. The team from that company agreed.

“One of the things we learned in this program is the power of a global corporation,” Thom says. “We could have closed our eyes and ears and invented something, but that would have taken us five to six weeks to do it ourselves.”

Instead, they worked with the people at SGMW. And the people at JR Automation reached out across the globe to people they knew in China to learn more about the equipment developed in China for making masks.

There were videos going back and forth across the globe, supplemented with numerous phone calls.

“Nobody could fly,” Thom says, “so the live collaboration was important.”

What’s more, he says that this project entailed functions throughout GM being involved, from the UAW personnel who would work the mask-making line to finance, legal, public policy and so on. “This wasn’t just a bunch of people in Manufacturing Engineering or Manufacturing doing their thing,” Thom says. “The entire organization was involved.” And when the GM Executive Team said that the masks would be donated, that encouraged the people throughout the organization even more because they knew the work they were doing was being done for the right reason. 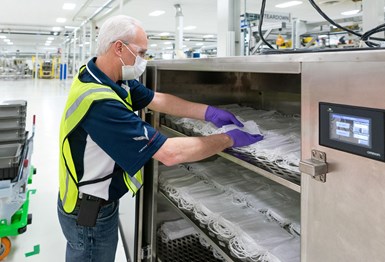 The number of people who wanted to help in the efforts showed the level of commitment toward responding to the pandemic.

Thom says that the number of volunteers who immediately raised their hands to become part of the project was remarkable. Even when the word went out that people would be needed to deliver the masks to hospitals, there were 500 people within hours—people from all parts of the company—who had their vehicles at the ready.

This wasn’t just an exercise of getting equipment and people who would operate it and perform other tasks within an ISO Class 8-equivalent space that was repurposed within the GM Warren Manufacturing plant.

Thom says that they wanted to be additive to other efforts to supply personal protective equipment (PPE), so instead of going out to the market to buy mask materials, work was done to repurpose automotive suppliers to provide the fabrics that are needed. “We wanted to make sure—and this is something we learned from SGMW—that we are adding to the global supply of mask materials, not diverting from other companies.” GDC, a company that provides GM with sound-deadening insulation, worked with OXCO to develop the three layers of material used to produce masks.

He says that when the first machine arrived on the floor at Warren, they had it up and running right away. The first mask was produced at 2:30 pm on Friday, March 27, meeting the one-week goal. They started producing at volume, besting their targets such that the plan called for 20,000 masks to be delivered on April 8, and the team made 44,000.

Since the first machine and line was put on the floor, a second for the surgical-style masks (i.e., the pleated-fabric ones) has been installed and they’ve added another machine to produce N95 masks.

Thom says that they’ve been working very quickly to help improve throughput. For example, they discovered that the machines that would put the strings on the mask were proving to be a bottleneck. “We could have gotten more of the machines and more tables, but we wanted to work on making the improvement.”

They had something of a fail-fast-and-fix approach. Thom says that he and a couple of other people stood around the machine with a piece of paper and a Sharpie, analyzing the problem. They came up with a fixture design that they thought would work, and that drawing was turned into a program for a 3D printer. The fixture was made. And they iterated a bit more until they got it right. “I haven’t seen an engineering drawing for that yet,” Thom admits, adding, “I don’t want to say that we’re making things up as we go along because that’s not a very good manufacturing engineering trait, but we’re making it up as we go along.”

“We’re making masks. We know we can make more,” he says. And they are.

One thing, Thom says, the auto industry knows about is how to bring things to scale, rapidly.

And he is immensely proud of being part of a global team that has gone from 0 to millions of masks in a matter of weeks.