Last December, the TU/ecomotive team at the Einhoven University of Technology, said there is some 2,100,000,000 tons of waste produced each year on the planet (probably more as you read this because it is ever-increasing), so to that end, they introduced the design for an electric vehicle that would be waste-intensive.

The team described a vehicle that would have extensive use of recycled materials for the chassis as well as the body. 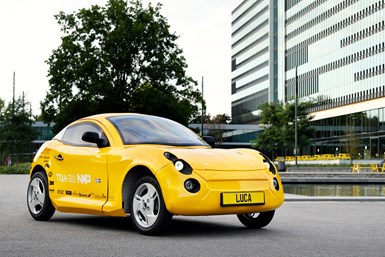 The vehicle uses hub motors in the rear wheels, which is done to minimize system losses. According to the team, the comparative efficiency of the vehicle is 180 km/liter of gasoline—which converts to 423.4 mpg. It has a range of 220 km and a top speed of 90 km/h.

Luca weighs 360 kg without batteries, and as the battery pack weighs 60 kg, so the whole thing has a curb weight of just 420 kg.

The vehicle seats two, with the seating featuring cushions made out of a combination of coconut fiber and horsehair, which is covered with a fabric made with recycled PET. The seat support structure is made with a thermoplastic honeycomb core material produced from recycled PET from material supplier EconCore. The Belgium-based company has been working with the team for four years. 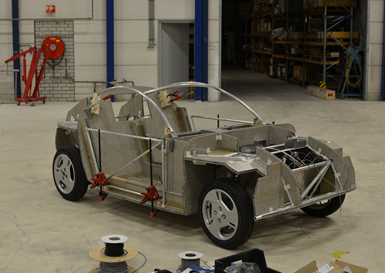 The chassis is produced with a recycled honeycomb core material.

In all, vehicle uses more than 20-m2 of the recycled honeycomb core material: The entire chassis is made with it, as parts of the dash and the battery housing.

One of the material/manufacturing challenges that had to be addressed was bonding the recycled PET core to composite sheet that is made of flax fibers and a recycled polyolefin matrix. The two don’t adhesively bond well.

So the solution was to cover the surface area of the core with a polyester non-woven fleece and a thin recycled PET barrier film, which allowed the adhesive bonding. The body is wrapped, not painted.

The exterior panels are made with recycled ABS. Paint isn’t used. The color comes from a wrap.

It is worth noting that Luca itself is designed and engineered for recycling, as well. (E.g., the wrap can be removed from the exterior of the car leaving without residue.)

The extensive use of recycled PET serves another environment-positive aspect to the vehicle. PET can be recycled just 10 times. Given the lifespan of a car vs. other products that are made with recycled PET—like plastic soda bottles—the material will have a significantly longer lifecycle in this application.

As team member Lisa van Etten said, “The team want to show that sustainable technology can be sexy by implementing waste as a valuable material into a sporty-looking car.”

The team behind the development of Luca.