An inside view on how the new generation came to be from the man who heads all Ford product development, Hau Thai-Tang
#Ford #Bollinger #engineer

They could have rested on their laurels, figuring that given their success there is nothing that they don’t know about pickups, having had their truck being the best seller for 43 years running. But they didn’t, Hau Thai-Tang says of the development of the 14th-generation of the F-150, on this edition of “Autoline After Hours.” 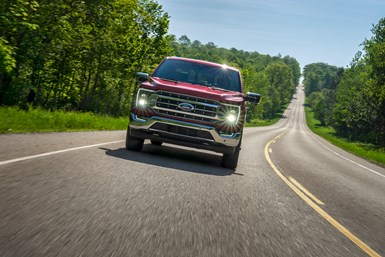 As Ford’s Chief Product Development & Purchasing Officer, he knows more than a little something about how this venerable vehicle was recreated for model year 2021.

2021 Ram 1500 TRX Crew Cab 4x4
The Software Revolution Is Here It’s a great time to be a software engineer in the auto industry.

And while the new F-150 has aluminum body panels (all new, not carryovers) and a high-strength steel boxed frame like the model it replaces, while it has six different powertrains and even 11 different grille designs, one of the things that Thai-Tang emphasizes about the new truck is that it is, as he puts it, the “smartest truck ever.”

Not All Tools Are Physical

That’s right: Although this is a tool for a considerable number of people (considerable as in: last year there were 896,526 F Series vehicles sold; while some of them were Super Duty models, the majority were the half-ton variety), the tool-like nature just doesn’t take the form of useful physical characteristics like a tailgate that allows clamping to be performed on it so that things like sawing can be done right there—to say nothing of the Pro Power On Board system that provides power (from 2 to 7.2 kW, depending on what’s under the hood) for things like saws, but the new vehicle offers things like Ford Co-Pilot360 2.0 and Active Drive Assist, which make access to information and hands-free driving available. In addition to which, he explains, there are over-the-air updates available, which are highly beneficial to owners who want to keep their equipment in action, as this means there can be fixes and improvements without downtime at a dealership. Here is Thai-Tang at the introduction of the Mustang Mach E last fall. While his role as head of Product Development at Ford meant he was involved in that vehicle, it is worth noting that he had also been the chief engineer for the 2005 Mustang.

It also, Thai-Tang notes, provides benefit to Ford in terms of product development, as it can determine what’s been used so they can focus efforts on the things that are most important to its customers.

And the customers were at the center of the development of the new truck, he says. Thai-Tang explains that Ford CEO Jim Hackett brought to the company a methodology called “human-centered design.” Hackett became deeply familiar with this process when he was at Steelcase. Human-centered design is associated with industrial design firm IDEO—which Steelcase became so involved with that for a while it owned IDEO.

There are three phases in human-centered design: Inspiration, Ideation and Implementation. Thai-Tang says that by using this process they were able to discover things about customer wants and needs that wouldn’t otherwise be uncovered. What’s more, a fascinating approach that they used for the development is to deploy what he calls “non-precious prototypes.”

In traditional development processes, carefully crafted models are created for elements of a vehicle that are then used for assessment. These models may be created in CAD, 3D printed or produced with clay, foam or other materials and then finished so as to appear like “the real thing.”

But not only can these approaches take lots of time, but Thai-Tang points out that the designers can fall in love with them, and therefore be highly protective of the model.

But for the F-150, he says, they created models with cardboard and packing materials and other ordinary materials. The models may not have been precise renderings, but they were sufficiently descriptive—and allowed fast modifications to address any concerns.

Using human-centered design and this quick prototyping process, Thai-Tang says, not only were they able to uncover ideas (like the Tailgate Work Surface, which includes integrated rulers, a mobile device holder, cupholder and pencil holder), but they were able to reduce time to market on the order of 20 to 30%.

While there is a considerable amount of talk about electric pickups from companies like Tesla, Bollinger and Rivian, and while there is going to be an electric F-Series (perhaps in mid-22), the 2021 F-150 is available as a hybrid. Again, this is something that customers were interested in, he says, as the 3.5-liter PowerBoost provides the torque characteristic of an electric motor, towing capacity of some 12,000 pounds and a range of approximately 700 miles on a tank of gas—again, to keep the truck going.