How the Third-Gen VW Touareg Was Introduced Today

When you think “Volkswagen,” you undoubtedly think “Germany.” It is clearly the quintessential German vehicle manufacturer, offering a broad range of vehicles ranging from the iconic Beetle to a full-size SUV like the Touareg.

The third generation Touareg made its world debut today. In what Volkswagen describes as the vehicle’s “most important market.”

And it is worth noting that the other largest markets for the Touareg are Europe (in general) and Russia. The company has produced approximately one-million Touaregs since its launch in 2002.

Even with the seemingly insatiable demand for SUVs in the U.S. market, the Touareg doesn’t do particularly well here. According to Autodata, VW sold 3,545 Touaregs in the U.S. in 2017 and only 4,223 in 2016.

You could park that combined number of SUVs at Disney’s Magic Kingdom and have 4,388 spots left over.

Here’s another interesting thing to know about the Touareg.

To make something of a splash for its intro, the company decided that it would have the Touareg driven the approximate 16,500 km between the factory where the SUV is built and Beijing.

This took it through 11 countries, including Slovakia, Poland, Kazakhstan, Mongolia, and more during the 21-day journey, along the snow-covered Urals through the mountains and steppes of Mongolia, and onto the Middle Kingdom.

The journey is interesting in and of itself, but that’s not what I’m referring to.

Rather it is where the Touareg is manufactured.

The Touareg is built in Bratislava, which is in Slovenia, separated by a whole country (Austria) from Germany.

Another indicator of the global nature of this industry. 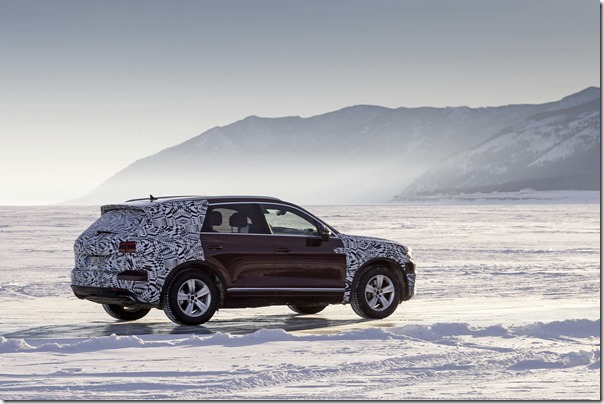 Touareg on a development drive on frozen Lake Baikal—in Siberia