How to Build a Military Vehicle from a Pickup Truck

A real piece of military gear. A real pickup that you can get at a Chevy dealership. A really remarkable story.
#GeneralMotors #racing #Daimler

Mark D. Dickens likes to race. He holds six land speed records at the Bonneville Salt Flats. He has slammed vehicles through the desert terrain at speeds that would sandpaper your eyeballs (assuming protective covering is not in place).

Dickens also happens to be a damn good engineer, as during his tenure at General Motors, which began in 1997, he’s held various positions in Advanced Vehicle Engineering, Vehicle Development, Racing, and Vehicle Program Engineering Management. (He set those records during the GM Racing stint.) 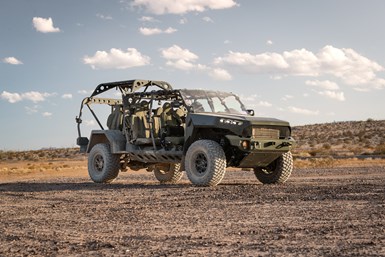 The GM Defense ISV. About 90% is like the Colorado ZR2 that you can get at a Chevy dealer. (Images: GM Defense)

Today, Dickens is chief engineer at GM Defense, and as he explains on this edition of “Autoline After Hours,” it was the desert racing that led to the company’s development of the U.S. Army’s new Infantry Squad Vehicle (ISV).

This vehicle has to carry nine soldiers. It must move quickly. It must be light enough to be sling-loaded from a UH-60 Blackhawk helicopter (~5,000 lb). It has to be sized so it can be fitting inside a CH-47 Chinook. While the military, Dickens says, is interested in alternative powertrains, he also acknowledges that at this point in time diesel is the predominant fuel, so the ISV is powered by a 186-hp 2.8-liter Duramax turbo-diesel that is mated to a six-speed automatic.

And there is also an issue of affordability while being fully mission-capable.

Which brings us back to the desert.

The Chevrolet Colorado ZR2 midsize truck—a truck that you can buy at your local Chevy dealer—has run in the “Best in the Desert” race series. And it is one of four vehicles that competed in 11 consecutive races.

So when GM Defense decided to go into competition to get the contract for the ISV, Dickens and the gear that was used in desert racing became the platform upon which their development occurred.

As Dickens explains, the ZR2 truck architecture—everything “below the waist”—is what you can buy right now at your local Chevy dealer (truck with Multimatic dual spool-valve shocks, the aforementioned diesel, etc.).

Designed to handle the terrain—and to provide occupant comfort.

Of course, one look at the ISV tells you that this isn’t something that, unless you are in the military, you are likely to see outside of “Halo” or a Mad Max movie.

And what you may be surprised to learn is that Dickens says that one of the things that was taken into account was driver comfort. He points out that just as a ZR2 Bison is capable of handling almost every condition that it is presented with yet is comfortable enough to be a daily driver, so, too (comparatively speaking, no doubt), is the ISV.

It is a great story about product development.

Dickens talks with “Autoline’s” John McElroy, Lindsay Brooke of SAE International and me about the creation of the ISV.

Then John, Lindsay and I talk about a number of other subjects, including the tighter relationship between Waymo and FCA (is FCA clever by relying on Waymo for its autonomous vehicle tech or, as McElroy argues, will Waymo be in better shape if it is able to obtain and monetize the data from the vehicles or, as Brooke argues, will there be a middle man who is going to get a large piece of the action).

There is the announcement from Daimler that it had a Q2 loss of $1.9-billion and the anticipated job cuts of thousands of employees—is this a one-off, or is it indicative of the shape of the auto industry going forward?

Tesla announced it made $104-million in net earnings in Q2—the fourth quarter running that it made money: Is it now accepted that Tesla is a solid auto company?

We talk about this and a lot more.