Although the second-generation Acura NSX was introduced in 2016, it almost seems like a lifetime ago. And of late another American-built mid-engine sports car is garnering all manner of attention, including being named the 2020 North American Car of the Year: the C8 Corvette.

Yes, the Stingray is an object of keen focus nowadays.

So perhaps because of that, the Acura team wants to draw some attention to what is arguably quite a feat of engineering, both in terms of vehicular engineering including the propulsion system and the manufacturing engineering for the all-aluminum, 500-hp twin turbocharged V6 that is the primary element in the NSX power unit (which also includes a 47-hp direct-drive electric motor between the engine and the 9-speed dual-clutch transmission to supplement driving the rear wheels and a pair of 36-hp motors packaged to drive the front wheels, for a total system output of 573 hp). 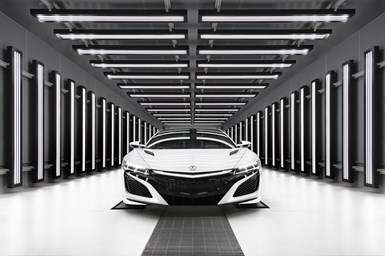 The Acura NSX. What more need be said? (Images: Acura)

So like any modern organization, Acura created a YouTube video that talks about the development of the engine. From the dealership to the race track

There are some fascinating details about what they have accomplished. Klaus points out that a “bone stock engine” went out and raced in the GT3 class—the same engine that someone who picked up an NSX at their local Acura dealer would have.

The NSX is low. The height is just 47.8 inches. It has 20-inch wheels in the back (19s in the front). Klaus notes that the engine sits so low in the vehicle that drawing a line from the top of the engine to the top of a rear wheel would be parallel to the ground. 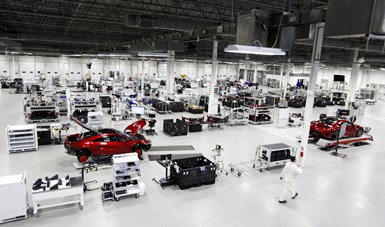 Inside the Performance Manufacturing Center, where the NSX is built.

The engine, explains Mankin, is built at the Honda Anna Engine Plant, which is some 44 miles west of the Performance Manufacturing Center where the NSX is assembled. The Anna plant is Honda’s biggest engine manufacturing factory in the world. That’s right: in Ohio.

The engines for the NSX are made in a separate room in the plant. Hand-built. Mankin points out that one person does what about 150 people—supplemented with lots of automated equipment—do.

It is really an engaging look at how a very special engine is built.

You can see it here.