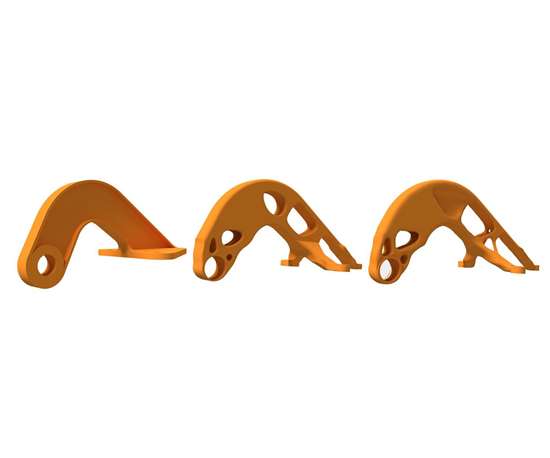 The topology optimization feature is a potent tool for lightweighting, as it can identify areas of a part that contribute the least to strength, flagging them for removal.

Technologies like microcellular injection molding and 3D printing have drastically increased the creative freedom many shops have in their approach to designing parts. However, lightweighting is not without complications. The tradeoff is that reducing the mass of a structure impacts every other mechanical aspect of design. A lighter material naturally has different structural tolerances, and manufacturers must consider these variances to meet the strict safety, durability and performance standards, all while keeping weight in mind. In an automotive landscape that sees these standards competing for the manufacturer’s attention, simulation of these complex parts is a must.

Because changing materials or hollowing a part impacts its strength and durability, it becomes necessary to test product designs through simulation software. Traditional simulation tools provide detailed feedback to assist in designing parts. This enables designers to confidently test the strengths of hollowed parts.

For example, Autodesk’s simulation software includes tools that evaluate stress and safety factors so that models can go through multiple iterations. The topology optimization feature is a potent tool for lightweighting, as it can identify areas of a part that contribute the least to strength, flagging them for removal. This speeds the design process significantly… READ MORE