How Would This Automated Vehicle System Have Handled Elvis?

What part of the body can be predictive of where a person might move? One answer: the pelvis

One of the big issues related to automated vehicles is dealing with people. No, not the people who are inside the vehicles and who might do all manner of untoward things while on the inside of one of those toaster-shaped units, but the people who are out on the streets.

Analysts at the Southwest Research Institute (SwRI) may be close to a solution. They’re applying machine learning to human behavior.

Specifically, they’ve created a motion prediction system. It uses computer vision to feed information into a deep learning algorithm. By watching biomechanical movements in real time, the system can predict what the next move might be. 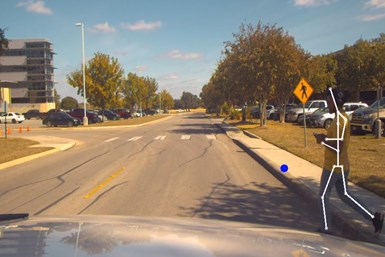 What the SwRI system “sees.” The blue dot is where the system anticipates the person will be going. (Image: Southwest Research Institute)

To do this, it focuses on the pelvic area.

Explains Samuel E. Slocum, a senior research analyst who led the internally funded project at SwRI, “For instance, if a pedestrian is walking west, the system can predict if that person will suddenly turn south.”

Well, other research approaches use “optical flow” algorithms to figure out where people might be going. The speed and direction are determined based on lateral motion. However, this system’s accuracy diminishes when people make an unexpected move.

The SwRI researchers are using a temporal convolutional network (TCN) to process the video data that is collected by SwRI’s markerless motion capture system, which automates biomechanical analysis in sports science as it combines camera vision and perception algorithms. Just as athletes can make sudden moves, so too can your average 10-year-old on the side of the road.

They are also using a convolutional neural network that learns and predicts trends over time.

If we see a pedestrian, we might prepare to slow down or change lanes in anticipation of someone crossing the street.

Notes Dr. Douglas Brooks, a manager in SwRI’s Applied Sensing Department, “If we see a pedestrian, we might prepare to slow down or change lanes in anticipation of someone crossing the street. We take it for granted, but it’s incredibly complex for a computer to process this scene and predict scenarios.”

And what we take for granted is going to somehow have to be coded into an automated driving system.