Although Toyota has just announced it will be bringing out two new hybrids—the Sienna minivan and the Venza crossover—the company is still pursuing a hydrogen approach—although in a slightly larger scale.

It has been publicly pursuing the use of fuel cell technology for Class 8 semis since November 2016; it introduced “Portal Project” in April 19, 2017 at the Port of Los Angeles, a Class 8 truck powered by two fuel cell stacks from Toyota Mirai sedans and a 12-kWh battery; the truck was being used for drayage operations in the port. 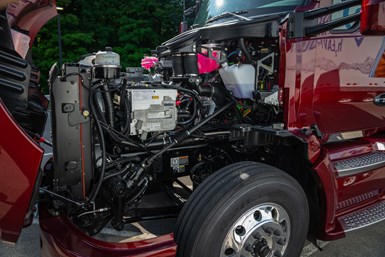 In subsequent years there have been advancements, but quietly, which probably underscores the overall seriousness of the work.

The work continues because Hexagon Purus, a subsidiary of Hexagon Composites, has announced it has received a contract from Toyota Motor North America (TMNA) valued at approximately $1-milion for hydrogen systems that will be used for Toyota’s latest prototype hydrogen-powered heavy-duty fuel cell electric truck powertrains.

According to Hexagon Purus the hydrogen systems consist of “everything required from the type 4 cylinder to the inlet of the fuel cell including the tubing, various valves, regulator, main customer filling interface, many safety related components, electronics, structure and aerodynamic covers.”

Hexagon Purus has been working with Toyota since the 2017 concept.

For a concept vehicle, it certainly is substantial.

It will begin deliveries of the hydrogen systems in Q4 2020.

Hydrogen may be a difficult push so far as passenger vehicles go, but when it comes to heavy-duty trucking, which tends to be far more logistically deterministic (i.e., routes tend to be consistent, so the refueling challenge is more readily handled than someone who suddenly decides they need to travel in their crossover to Somewhereville, where the closest thing to hydrogen is the helium tank at Party City for balloon inflation), it makes plenty of sense.