This past weekend, the Woodward Dream Cruise was held in Detroit, where there was a seemingly endless parade of classic and wanna-be-classic cars from days gone by rolling past throngs of viewers from literally all around the world.

This whole classic, throwback idea came to mind when reading about a new development out of the U.K., the “ezero hydrogen additive box.”

Those of you of a certain age will remember the multitudinous additives that were once on offer to improve the performance of your engine. 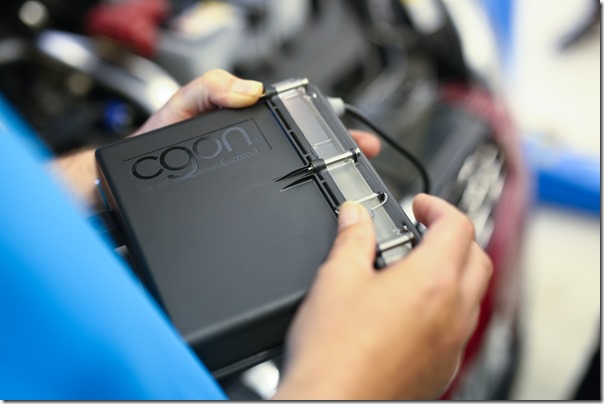 The ezero hydrogen additive box brings this to the 21st century.

According to the developer CGON, this device “can reduce engine emissions by up to 80% and offer fuel savings of up to 20%.”

Not just any form of hydrogen, but ortho hydrogen, which has both of its nuclei spinning in the same direction (as distinct from para hydrogen, where one goes clockwise and the other counter). Apparently ortho hydrogen burns better.

Anyway, the ezero hydrogen additive box is attached to the engine and plumbed such that its output goes into the intake, where it combines with the fuel-air mixture (this can be gasoline or diesel fuel) with the resultant burn being cooler, faster and more complete.

To get this hydrogen, the user pours an electrolyte solution into the box where it is electrolyzed as needed. The ezero fluid (250 ml of electrolyte costs £5) is added very 6,000 miles.

Cost of the system for an automobile (there are also ezero hydrogen additive boxes sized for larger vehicles)? £459, including VAT and fitting. (Yes, this is a product available in the U.K. For now.)