Perhaps traffic congestion will be less of a problem. Of course, then there’s air traffic control. . .
#Hyundai

There are some 1.3-billion cars on the road worldwide. And chances are good you’ve been stuck in a traffic jam sometime recently. As the INRIX 2018 Global Traffic Scorecard reckoned, “Americans lost an average of 97 hours a year due to congestion, costing them nearly $87 billion in 2018, an average of $1,348 per driver.”

Odds are, you thought that it would be nice if your car could simply take off so you could fly above the traffic.

Which is sort of what Hyundai Motor Group is pursuing in its effort to become a “Smart Mobility Solution Provider,” as it is developing personal electric vertical takeoff and landing helicopters. 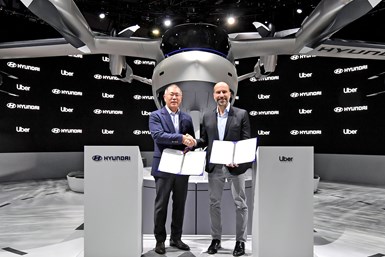 Jaiwon Shin, executive vice president and head of the Urban Air Mobility Div. at Hyundai Motor (who would imagine such a division at a company best known for the Sonata?), said,  "We are looking at the dawn of a completely new era that will open the skies above our cities. Urban Air Mobility will liberate people from grid-lock and reclaim time for people to invest in activities they care about and enjoy.”

Yes, take off instead of being stuck in traffic.

This is not just a pie-in-the-sky undertaking, either. They’ve developed the S-A1 concept that seats five, including the pilot.

It is designed for a cruising speed up to 180 mph, a cruising altitude up to 2,000 feet, and has a 60-mile range. It is 100% electric, which means it is quiet, and consequently avoiding sound restrictions that some municipalities have regarding helicopters.

And they’ve partnered with Uber on the development of actual aircraft, so the S-A1 could come to a city near you sometime in the foreseeable future.

According to Eric Allison, head of Uber Elevate, “Hyundai is our first vehicle partner with experience of manufacturing passenger cars on a global scale. We believe Hyundai has the potential to build Uber Air vehicles at rates unseen in the current aerospace industry, producing high quality, reliable aircraft at high volumes to drive down passenger costs per trip. Combining Hyundai’s manufacturing muscle with Uber’s technology platform represents a giant leap forward for launching a vibrant air taxi network in the coming years.”

So maybe those flying cars we’ve been hearing about for all these years won’t actually be cars per se, but maybe they’re becoming much, much closer to reality.