If you look carefully at the photo below, you’ll notice that the gentleman is (1) looking out the side window, (2) has at least one hand off the wheel, (3) traveling in a moving car (note the spin of the front wheel), and (4) reading a book that appears to be titled Digital Control Systems: 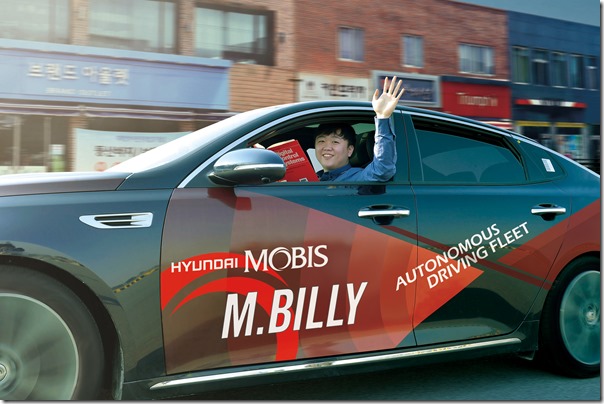 Which is probably a useful text because the man is probably one of the engineers—there are 600 now, going to 1,000—who works in R&D for supplier Hyundai Mobis, which has announced that it is committed to developing sensors—primarily radar systems—for autonomous driving.

According to Gregory Baratoff, vp of Autonomous Driving Technologies at Hyundai Mobis, “We will complete the development of entry-level radars and high-performance radars within this year and commence production from the second half of next year.”

Much of the work is being done at the Hyundai Mobis Seosan Proving Ground, which has a test track for autonomous driving overall and one for radar development. The radar track, which is 250 meters long, has reflective plates along its side every five meters. As a radar equipped car drives down the center of the track they’re able to measure the range and angle of the detection, which then allows them to determine the resolution and accuracy of the radar system.

The company also says that it will be deploying both deep learning and AI to amplify the capabilities of its sensors. About this, Hwang Jae-ho, Director of ADAS at Hyundai Mobis, said, “With the recent development of innovative technologies that could alter the competitive atmosphere of the sensor market, such as advanced identification technologies using deep learning, we will actively utilize them in such a way to realize a quantum jump of our sensor technology.”