Not everything that comes out of the [San Francisco] Bay Area that’s associated with the auto industry has to do with some form of autonomous driving technology, even though it most certainly seems that way.

Case in point: the partnership developed between Ford and Ekso Bionics of Richmond, California, a company that makes exoskeletons that can be worn by workers to facilitate their production activity.

Specifically, Ford is piloting, in two U.S. plants, the use of what’s called the “EksoVest,” a wearable device that helps support a worker’s arms while performing overhead tasks. 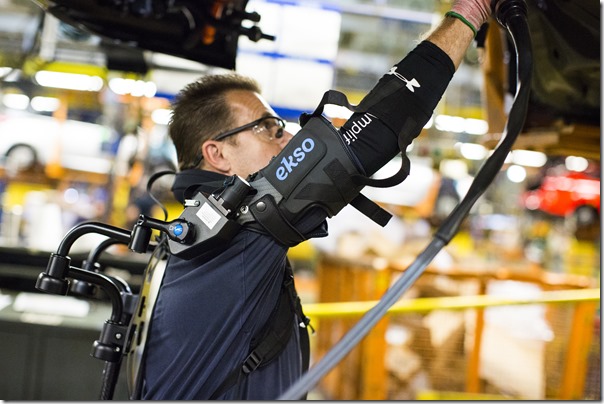 The vest weighs 9.5 pounds and can be fitted to workers who range in height from five feet to six feet, four inches.

The unit provides adjustable lift assistance ranging from five to 15 pounds per arm, thereby helping reduce stress and strain on the operator’s body

The device is not electrical, so there are no batteries, no cords. It provides a mechanical assist to the worker.

Given that the ergonomists at Ford have calculated that average number of times that some workers at assembly plants lift their arms above their heads for work is 4,600 times per day, presumably this upper body exoskeletal tool can be a major benefit to the health and wellbeing of the auto workers who are fitted with it. 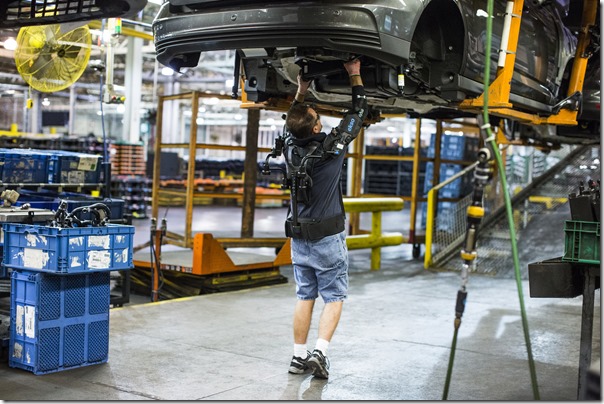 It is worth noting that Ford has been working to reduce fatigue and injury in its plants. According to the company, between 2005 and 2016 there was an 83 percent decrease in the number of incidents that resulted in days away, work restrictions or job transfers. The number is 1.55 incidents per 100 full-time North American employees.