Developing better electric vehicle batteries is something that is occurring at a near-frenzied pace as people are seeking batteries that provide longer range, less mass, reduced cost, and that are less reliant on rare earth elements that are often found in places that are less than conducive vis-à-vis a stable supply chain.

How difficult is it?

Well, Daimler and IBM have announced that through some co-development work they’re doing they’ve achieved something of a breakthrough on lithium-sulfide batteries, which is conceivably the successor to lithium-ion batteries.

And to conduct this research they’re deploying 4-qubits on an IBM Q Valencia 5-qubit quantum computer. 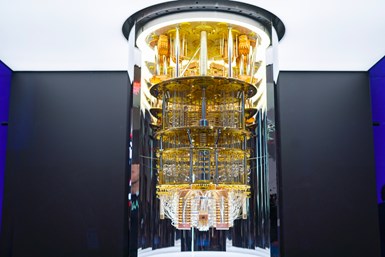 As we’re not going to pretend that we know what that is, here’s what Jeannette Garcia, Senior Manager for Quantum Applications, Algorithms and Theory, IBM Research (research.ibm.com), says in a blog post related to the work being done with Daimler:

Qubits themselves operate according to the laws of quantum mechanics, just like the molecules researchers are trying to simulate. The hope is that in time quantum computers can greatly speed up the simulation process by precisely predicting the properties of a new molecule that can explain its behavior, such as reactivity. Programming qubits works by using unique properties of superposition and entanglement, allowing the potential for researchers to evaluate expectation parameters – in a much more efficient way than a standard computer ever could.

And the industry has been working for many years with companies like IBM, using supercomputers to model everything from combustion in those cylinders to the airflow around the exterior of the vehicle.

But now there is a technology transition underway in terms of propulsion. This isn’t simply a matter of swapping out a gasoline tank with a battery package and an engine with an electric motor.

Sure, those things can be and are being done. But that is like putting a Band-Aid on a compound fracture: Completely insufficient.

This Daimler-IBM work indicates the degree to which efforts are being—and must be—made in order to make this technology shift.

And we haven’t even talked about the challenges of trying to automate driving. . . .