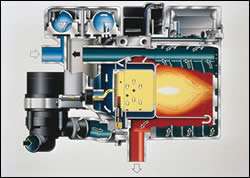 Blue Heat? Isn’t that a movie about a super-silent police helicopter?

No. That was Blue Thunder. Blue Heat is a line of auxiliary heaters from Webasto (www.webasto.com). Versions are increasingly common on diesel vehicles, which have a tough time producing adequate heat to get the cabin up to temperature on cold days. Automakers from Alfa to Fiat to MG Rover to VW offer these units on their diesel-powered vehicles to increase heat output in the passenger compartment.

Big deal. Diesels aren’t even a blip on the sales charts here.

That’s true, though U.S. OEMs have investigated these heaters for use in their heavy-duty diesel pickups. But it’s a variant of this design, known as a “parking heater,” that is drawing attention these days. More than 20 states have introduced anti-idling laws that were written primarily to stop truckers from leaving their rigs idling for long periods. Increasingly, these statutes are being used to keep car owners from idling their vehicles on cold days, especially in those areas of the country having trouble meeting EPA air quality standards. Not only do the driver and passengers have to shiver as their vehicle warms up on the way to school or work, those tough-to-control cold-start emissions spike, and often the trip isn’t long enough to fully warm the engine.

So how does this thing work?

It’s quite simple, really. Cold engine coolant flows through the Blue Heat unit, through the vehicle’s heater core, and back to the engine. The device draws small amounts of fuel from the vehicle’s fuel tank into a chamber where it is mixed with ambient air, and ignited by a glow plug. The engine coolant flows around the unit’s heat exchanger, and maximum output is reached in under 60 seconds. Current units weigh about 2 kg and produce approximately 5 kW of heat. Next generation models will be 30% smaller, lighter, and faster.

What does this do to fuel consumption and emission levels?

An average vehicle idling for 30 minutes at 20°F uses about one gallon of fuel. Webasto claims the same vehicle fitted with a Blue Heat unit consumes just one cup (8 oz.) of fuel over the same time period. Recent testing at an EPA-approved lab showed that a Blue Heat parking heater’s CO output was 43 times lower than a vehicle meeting ULEV II emission standards idling under the same conditions. Plus, a parking heater-equipped car has 70% lower emissions over the first five miles of travel than a car driven off without warming up. Finally, despite combusting fuel at Lambda 1, the unit also can be fitted with a catalyst to bring its emission numbers lower still.

That sounds expensive. How much do these things cost?

Aftermarket units in Europe average about $1,500, though a number of European automakers bundle it with a cold weather package. Currently, Porsche is the only automaker to offer a parking heater in the U.S., bundling a Blue Heat TT-C in its $2,680 cold weather package. BMW fits the same unit in the U.S.-built X5 models it sells in Europe. Webasto expects its U.S. sales to start in the luxury sector before moving to include SUVs, minivans and so-called “special segment” vehicles, and be driven by tougher enforcement of state anti-idling laws.