The cars running at the Firestone Grand Prix of St. Petersburg this weekend as part of the NTT INDYCAR SERIES are going to look different from what you may be familiar with because the vehicles will all be equipped with what is called the “Aeroscreen.” 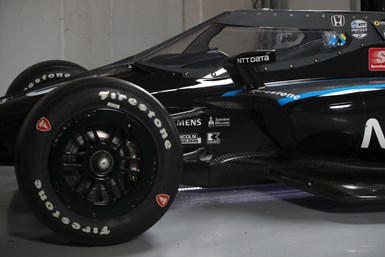 Think of it as a wrap-around windshield.

The system was developed by Red Bull Advanced Technologies and is a safety technology that is engineered to reduce the risk of drivers being impacted by flying debris or other objects.

The Aeroscreen is produced with a polycarbonate laminate from PPG and a titanium frame produced by Pankl.

The polycarbonate windscreen has an interior anti-reflective coating, an anti-fogging device based on an integral heating element, and as many as eight exterior tear-offs that can be removed during pit stops.

The windscreen weighs 17.3 pounds. It can withstand being hit by a two-pound object hitting it at 220 mph.

As for the titanium frame, it weighs 27.8 pounds. It is certainly sturdy, being able to withstand 34,000 pounds of force.

The entire assembly can be installed or removed from a vehicle in less than 15 minutes.

As Jay Frye, INDYCAR president puts it, “The Aeroscreen is an industry-changing, total driver safety solution.”

And it makes the cars look cool, too.