Infiniti Ups the Ante on the Q50

Since 2013, when the vehicle first went into production as the Infiniti Q50, the first vehicle to undergo the nomenclature modification (it had been the G37), it is the best-selling vehicle in the entire lineup: there have been more than 210,000 of the premium sport sedans sold on a global basis.
#Infiniti #HP 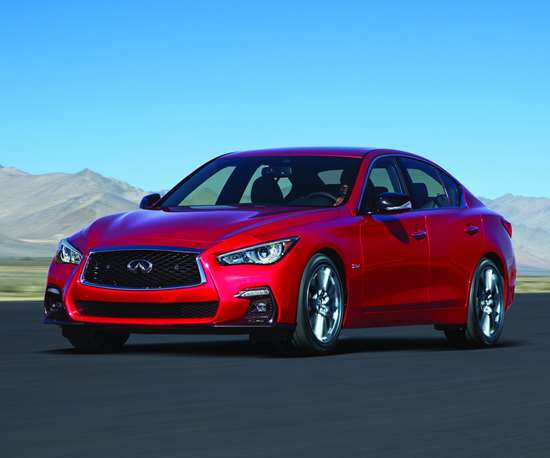 The Infiniti Q50 is available in RED SPORT 400 trim, which means, yes, 400 hp, but also a more aggressive and aero front fascia as well as different interior trim.

The Q50 is produced in a plant in Tochigi, Japan. On a global basis, the Q50 is Infiniti’s sales volume leader.

“At Infiniti, our production system follows a very strict 'kaizen' process of continuous improvement. Not only do we work hard to improve with every vehicle that comes off the line, as part of our 'Empower the Drive' brand promise, we also strive to continually improve every process in every part of the business.” That’s Roland Krueger, chairman and global chairman of INFINITI. He was talking on the occasion of the production launch of the Q50 at a plant in Tochigi, Japan, at the start of June.

Obviously, he was talking about the company’s approach to all of its products and processes. But the Q50 is of particular importance to the brand. That’s because since 2013, when the vehicle first went into production as the Q50, the first vehicle to undergo the nomenclature modification (it had been the G37), it is the best-selling vehicle in the entire lineup: there have been more than 210,000 of the premium sport sedans sold on a global basis.

Arguably, the 2018 model is a vehicle that has been kaizened since 2017 as there are primarily incremental improvements to the vehicle, not wholesale changes. They’ve essentially created versions of the car for those who are looking for the “premium” and those who are looking for the “performance.” There are the Pure and Luxe trims for the former and Sport and Red Sport for the latter.

Essentially, there are new front and rear fascias shared by the Pure and Luxe and the same for the Sport and Red Sport (e.g., the front of these latter two vehicles features a more angular front bumper and wider, lower air intakes—more aggressively aero). The interiors have undergone an upgrade, such as the deployment of a new steering wheel across the lineup, a new shift lever (for the seven-speed electronically controlled automatic transmission with manual shift mode and available steering wheel-mounted magnesium paddle shifters on Q50 3.0t SPORT and RED SPORT 400 models, of course), and updated lighting for the gauges as well as for the overall interior (a.k.a., “ambient lighting”).

The Q50 is available with four different powertrain setups. There is a 208-hp 2.0-liter four. There is a 3.0-liter twin-turbo V6 which actually serves as a set of engines. That is, it is available in “standard” output, which means that it produces 300 hp at 6,400 rpm and 295 lb-ft of torque at 1,600 to 5,200 rpm. Then, for the top-of-the-line Q50 Red Sport 400, the engine is tuned so that it produces 400 hp and 350 lb-ft of torque (at the same respective revs). This engine, part of the company’s VR series, features aluminum construction, spray bore coatings, an integrated exhaust manifold, direct gasoline injection and a twin turbo system. There is a turbine speed sensor that allows the system to operate at up to 220,000 rpm at a steady condition and 240,000 rpm in a transient condition. The 400-hp version has boost pressure of 14.7 psi, while it is 9.5 psi for the 300-hp Q50.

And finally, there is a hybrid version of the Q50. This features another internal combustion engine, a 3.5-liter V6 that’s rated at 302 hp and 258 lb-ft of torque. It is combined with a 50-kW (67 hp) motor, with the two connected with a two-clutch control. Net horsepower for the hybrid is 360.—GSV