Inside the Honda Performance Manufacturing Center

Appears in Print as: 'Inside the Performance Manufacturing Center'


They don’t make many Acura NSX supercars. But those that they do are built with meticulous care and attention.
#Audi #Honda #Acura 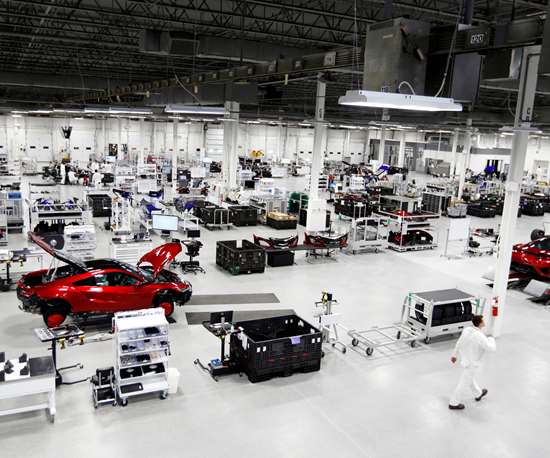 Although this might look like some sort of exceedingly clean warehouse, it is actually the Performance Manufacturing Center, where the Acura NSX is produced. Maximum daily volume? Ten supercars per day. 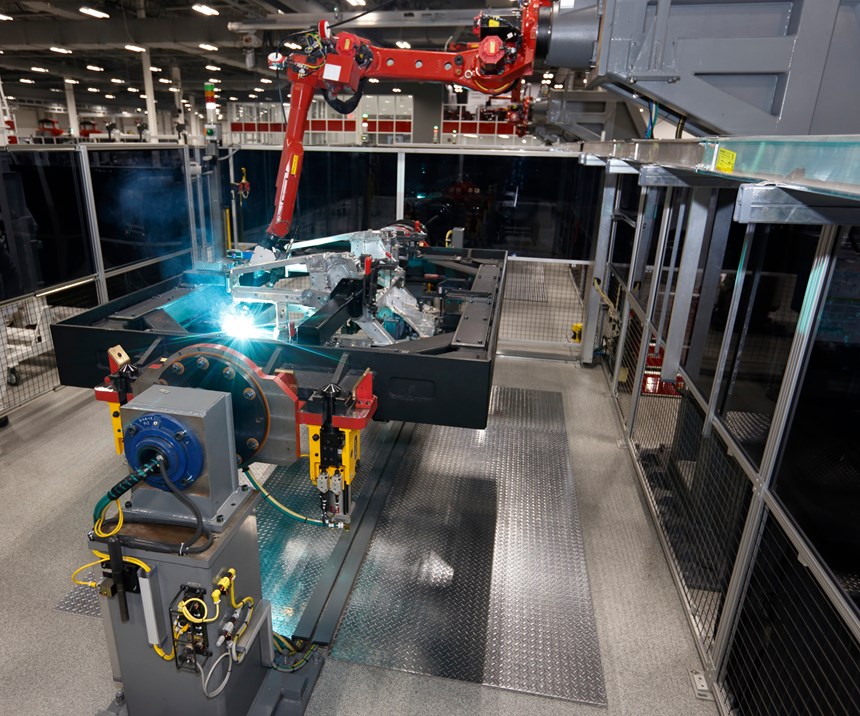 This fixture for the NSX spaceframe rotates 360°, allowing the robotic MIG welding to be performed throughout the structure. 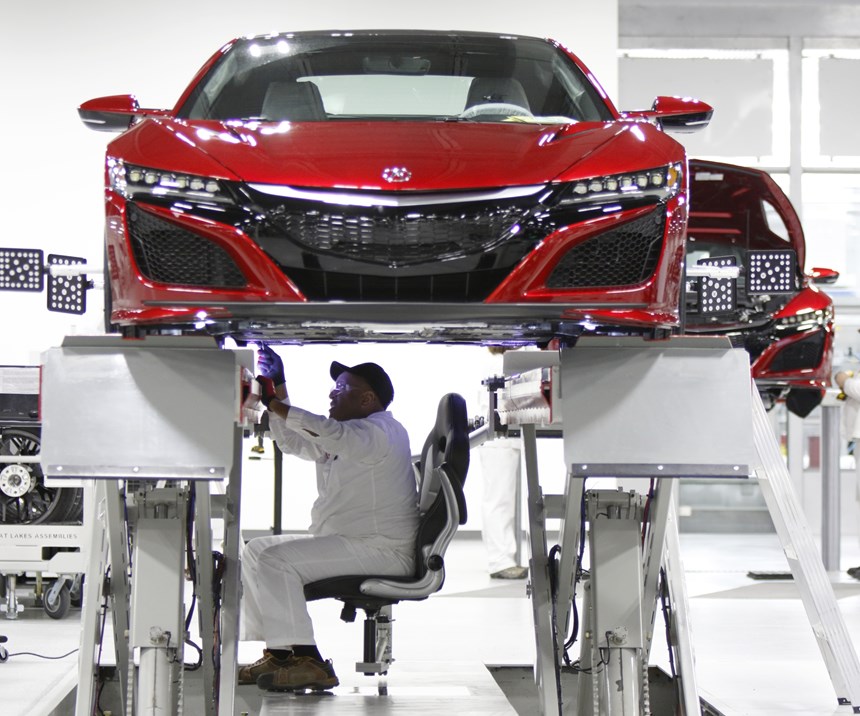 At the alignment station there is a chair—nicknamed the “Star Wars chair”—that allows an associate to work under the vehicle. Even the bottom of the vehicle gets attention.

Approximately 99 percent of all Acura vehicles—including the NSX, the vehicle that the company compares to the likes of the Audi R8 V10, Porsche 99 Turbo and McLaren 570S—sold in the United States are manufactured in the United States. In fact, were you to look at a map, the preponderance of Acuras are assembled within 8 miles of one another in Ohio: the East Liberty Assembly Plant produces the RDX and the MDX, Marysville Assembly manufacturers the ILX and the TLX, and the Performance Manufacturing Center (PMC) is the only place on the planet where the NSX is made. It is worth noting, as well, that the second-generation NSX was also designed and engineered in the U.S., and it is unquestionably the global marque vehicle for Honda (yes, Acura is Honda and in other parts of the world the NSX is a Honda). In case you are wondering what isn’t produced in Ohio: it is the RLX, which is manufactured at the Sayama Plant in Japan.

But the second-generation NSX, which launched as a model year 2017 vehicle, an AWD hybrid vehicle with a total system output of 573 hp (it has a 500-hp twin-turbo V6 supplemented by three electric motors) is interesting in that even though it is a niche vehicle by any calculation (for the entire calendar year of 2017 there were 581 NSXes delivered in the U.S.), the Performance Manufacturing Center, which is a 170,000-ft2 facility where there are some 100 associates who were selected from the ranks of the East Liberty and Marysville plants, was established to build the model. Think of that for a minute: a car that has an output so small gets its own manufacturing facility. Arguably because Honda cares deeply about manufacturing.

And the people in the PMC really do, by and large, produce the NSX, as while there are some robotics in the plant (e.g., the vehicle is based on a multi-material space frame that is MIG welded by eight robots (an interesting aspect is that not only are there the axes of the robot used in the welding operation, but the fixtures actually rotate in a rotisserie-like manner, going 360°); there is a closure panel hemming operation that uses robot arms (and what is interesting to note is that the PMC also operates in some ways as a manufacturing process lab in that this hemming operation has also been ported over to the East Liberty Plant for the production of the MDX hood). In addition to the 860 MIG welds, there are also approximately 345 self-piercing rivets and some 245 flow-drill screws used in the NSX assembly. And, of course, there are robots in the paint booth.

The facility has the capacity to build up to 10 vehicles per day. When you have a vehicle that has a starting MSRP of $157,500, you’re going to be building to order, not building to stock. And unlike, say, an Acura ILX, the buyer of an NSX isn’t likely to be picking something off the lot.

There are several vehicles that are described as being “multi-material.” The NSX takes that to almost a new level, as not only does it use aluminum and sheet molding compound for exterior body panels, but it has a carbon fiber front floor panel, and in its structure not only does it use aluminum and steel, but within the deployment of those materials there are some world’s firsts.

That is, for the space frame it uses ablation casting, which was developed by Alotech, Ltd. (alotechltd.com); the six cast nodes are produced at the Honda Anna Engine Plant. The purpose of these castings is to not only to be both strong and comparatively light (the process allows variable wall thickness so that it can be tailored based on the specific requirements of the location where deployed in the structure), but also provides the benefit of being able to manage crash energy: for example, the two at the front deform in a crash to absorb energy (crushing at 155 kN) from entering the cabin; the two nodes in the back are more rigid than those in the front (being able to handle 210 kN of load) so that energy is transferred to the frame rails during a collision. The use of ablation aluminum casting is said to be an automotive first.

They elevated the use of steel, as well. That is, back in 1990, when the original NSX was in production, the roof-crush standards weren’t anything like they are now. Today, the A-pillars in many vehicles are rather large in order to protect the cabin occupants in case it flips during an accident. But one of the characteristics that the designers for the current, second-generation NSX wanted to maintain was good visibility for the driver (even the hood is formed so as to provide location points for the driver), which means thin A-pillar. So to get thinner A-pillars they engineered it so that the top portion of the A-pillars and the roof rails are produced with ultra-high strength steel tubing.

The tubing undergoes a process termed “3DQ,” for three-dimensional bending and quenching. That is, the tube is heated and then robotically formed to the final required shape, then quenched with water jets. The component achieves a tensile strength of 1,500 MPa. Consequently, the finished pillar is 1.65 x 1.42 inches, or about an inch narrower than a conventionally produced part. Again, a world’s first.

In the Shadow of Honda Marysville

The Performance Manufacturing Center is nearly in the physical shadow of the original Honda Marysville Assembly plant, where some 4,200 associates work and which has an annual capacity of 440,000 vehicles. (At PMC they work one shift, four days a week, 10 hours per day; in 52 weeks that’s 208 days, at the maximum of 10 vehicles per day, that would be a capacity of 2,080 vehicles.) Honda vehicles have long been known for their quality, durability and reliability, and it is that same sort of thinking that has gone into the engineering and production of the NSX.

Of course, most Hondas don’t have a top speed of 191 mph.