Volkswagen is making a design-led advance into the market as it is launching the Arteon, a five-seat fastback sedan. Based on the company’s Modular Transverse Matrix (MQB) platform, it has a 111.9-inch wheelbase and an overall length of 191.4 inches; it is 73.7 inches wide and 56.2 inches high. All of which is to get to the point that there is sufficient roominess for it to be a business-class type vehicle—the cargo space in the back goes from 19.9- to 55.0-cubic feet (depending on whether the rear seat backs are up), which is to say that there’s conceivably a tremendous space for luggage—yet, at the same time, there is an overall design approach, as well as individual cues (e.g., flared wheel arches; a long clamshell hood; strong shoulders at the rear), which gets to the point that this is a car with character, not just functionality. 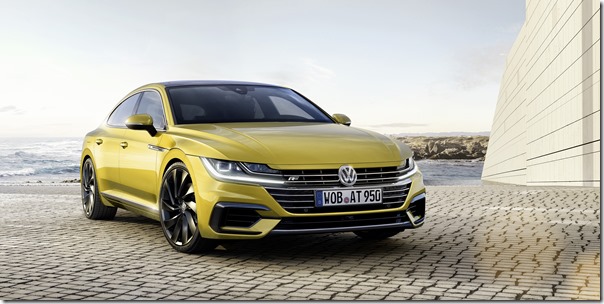 The production model of the car, revealed at the Geneva International Motor Show, comes two years after VW displayed the Sport Coupe Concept GTE in Geneva, the direct heir of the Arteon. Says Klaus Bischoff, head of Volkswagen Design, “The fact that the Arteon has gone into production with without minimal design changes from the show car demonstrates Volkswagen’s appetite for innovation.”

Or, arguably, it demonstrates that Volkswagen recognizes that gaining more than a modicum of a reputation for design leadership will help bring consumers back into its dealerships.

Of course, VW isn’t stinting on the tech for the car that’s positioned above the Passat, taking the space that the CC inhabited.

And while not all of the tech will translate to the U.S. market—the Arteon is launching in mid-June in Germany and won’t be reaching the U.S. market until next year, possibly in the Spring—there is a considerable amount that’s being made available, such as a new adaptive cruise control system that uses navigation and traffic information to automatically adjust the speed, based either on speed limits or traffic conditions. These inputs are also used to provide “predictive beam” capabilities for the headlights: as the car knows where it is going in space, it can anticipate bends in the road and position the headlights accordingly. What’s more, there is an “Emergency Assist” function, now in its second generation, which, should the driver become ill at the wheel, will both slow the car and move, traffic conditions permitting, to the right lane. 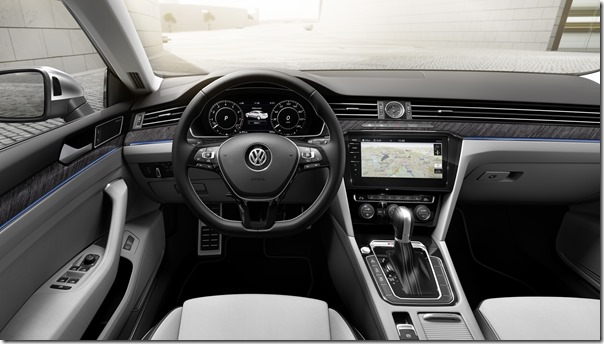 On the instrument panel there are the Volkswagen Digital Cockpit, a heads-up display, and an infotainment system, called Discover Pro, that features a 9.2-inch glass screen; it can be operated via gesture control.

From a powertrain standpoint, the vehicle—again, this is something that is been decided for Germany, not necessarily for the U.S. or other parts of the world (don't look for diesels in the U.S. market, for example)—is available with six turbocharged four-cylinder engines, three gasoline, three diesel. There is one 1.5-liter gas engine and two 2.0-liter engines; the horsepower ratings are 148, 188 and 276, respectively. The1.5-liter TSI Evo comes standard with a six-speed automatic. The other two come with seven-speed dual-clutch automatics. The the top-ranked 2.0 TSI also comes with 4Motion all-wheel-drive as standard.

This is similar to the diesel arrangements. The entirely level vehicle produces 148 hp and it comes with the six speed, with an optional seven speed. The middle 2.0 TDI produces 188 hp and it, too comes with a standard six speed, with the seven speed DSG and an option, as is 4Motion. Then there is a 2326-hp diesel that comes standard with a seven-speed DSG plus 4Motion.

(And word is that the U.S. market will be getting an eight-speed transmission.)

But one can’t get away from the fact that this is a car that’s been well designed. As Bischoff puts it, “The Arteon combines the design elements of a classic sports car with the elegance and space of a fastback. It’s an avant-garde business-class Gran Turismo that speaks to the heart and head alike.”