That Ford is investing $145-million in the Cleveland Engine Plant to increase production of the 3.5-liter EcoBoost engine isn’t entirely surprising. The plant has been producing Ecoboosts since 2009, the year the engine was introduced. 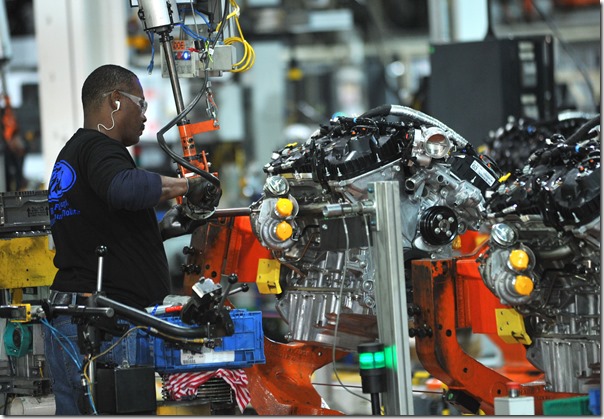 In that time, they’ve produced more than one-million of the engines. They build 2.0, 2.3- and 3.5-liter variants of the EcoBoost as well as a normally aspirated 3.7-liter V6 for the Mustang.

The 2.0-liter is for the Edge. The 2.3 for the Explorer, Mustang and Lincoln MKC.

The 3.5-liter engine, the one that they’re expanding capacity for, is used in the F-150.

While it is remarkable that a 2.3-liter engine is powering something as large as the Explorer, it is no less surprising that a 3.5-liter V6 engine is getting the job done for buyers of the full-size pickup—although it should be noted that there is another EcoBoost available for the F-150, a 2.7-liter engine that produces 325 hp and 375 lb-ft of torque.

According to Joe Hinrichs, Ford president, The Americas, more than 60% of F-150 buyers are opting for EcoBoost engines. Know that there are two other engine options available for the truck, a normally aspirated 3.5-liter V6 and a 5.0-liter V8. Which means that the two EcoBoosts are handily outselling the non-turbocharged engines.

The 3.5 capacity that they’re investing in in Cleveland is for a second-generation version of the engine.

While details about that engine are not available, know that a high-performance variant of the engine will be under the hood of the 2017 F-150 Raptor (mated to a 10-speed transmission) and in that application the engine will provide more power than the 6.2-liter V8 that currently powers the Raptor—and that is good for 411 hp.