Is Past Prologue: Mustangs Then and Jaguars Tomorrow

This is a picture of the interior of the 1994 Ford Mustang, the fourth generation of the venerable vehicle: While it is certainly stylish—for 1994—one notable aspect is the steering wheel: in 1990 the Mustang got a driver’s side airbag as standard equipment.
#Ford #engineer #Land Rover

This is a picture of the interior of the 1994 Ford Mustang, the fourth generation of the venerable vehicle: 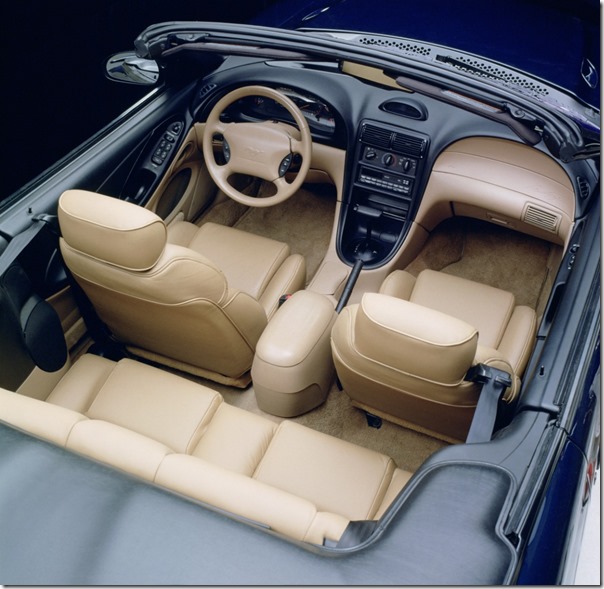 While it is certainly stylish—for 1994—one notable aspect is the steering wheel: in 1990 the Mustang got a driver’s side airbag as standard equipment. This left the engineers trying to figure out where to put the horn because they surely didn’t want the driver to punch the airbag cover, so they put horn buttons on either side of the steering wheel, just above 3 and 9 o’clock. But for the 1994 Mustang they were able to redesign the cover so that the horn could go back to the center of the wheel.

The point of showing that is to show this, an interior sketch of the Jaguar FUTURE-TYPE concept: Yes, this is a concept car. One for 2040, which is as far from us in time as that Mustang.

According to Jaguar, this is conceptually an on-demand autonomous vehicle. It has 2+1 seating to make it capable of better maneuvering crowded urban environments, and the seats are adjustable so that people can more readily chat.

The steering wheel is the Jaguar Land Rover Sayer concept, which moves in and out of the vehicle with the driver.

Why a steering wheel in an autonomous car? Because the FUTURE-TYPE also provides what’s called “assisted driving,” or the means by which the driver can get in the loop should it be of interest (with all of the on-board sensor tech working to make that driving experience all the safer).

Arguably, the interior of that Mustang isn’t wholly different than what you’d see in almost any car right now (with the exception, of course, of it not having an iPad-like interface smack in the middle of its instrument panel).

Which makes us wonder whether things are going to change so dramatically in 23 years.